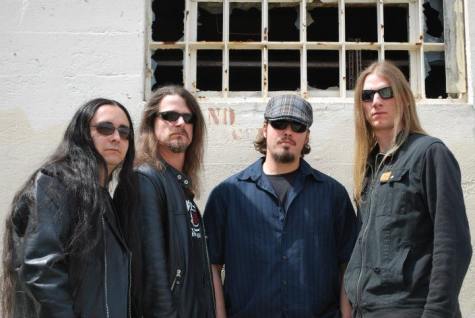 Commented the band: "Regretfully, Dan Nelson has decided to leave BLACKGATES. He has decided that he wants to concentrate full time on being a father to his newborn son along with focusing on his own musical endeavors. All of us in BLACKGATES understand his decision and wish him all the best. He'll always be family.

"That being said, BLACKGATES is moving forward and is now actively seeking a new permanent lead vocalist. We're looking for a full-on metalhead who can sing with some serious melodic power and edge, with a bit of gravel on the top."

Stated Epp: "We've got over a dozen tunes that we feel are killer, we just need the right guy to come in and put his stamp on them and take what we have even further." Bostaph added: "New blood in the band will help push our sound further. Our newest material is heavier than our first demo. We're looking forward to working with a new vocalist, and getting out there and mixing it up in 2013."

Vocalist submissions in the form of demos, links and videos can be sent to [email protected], subject: "VOX SEARCH."

BLACKGATES made its live debut on May 5, 2012 at Rooster's Roadhouse in Alameda, California as part of the Cinco De Mayo Metal Throwdown with guests MUDFACE, FALLING TO PIECES and ANOTHER VOID.

Bostaph previously stated about BLACKGATES's musical direction, "Our sound is drawn from all of our influences. Mostly, we don't want to be a thrash metal band, although we draw from that genre as well. There is something in our music for everyone. Heavy grooves, good hooks and Dan's killer pipes. I think we have an independent sound that will stand on its own."