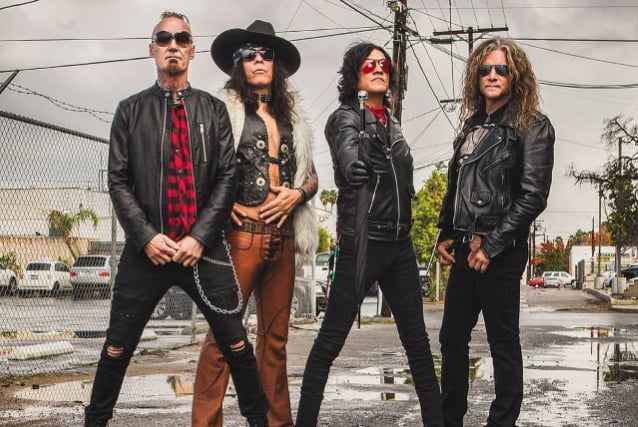 Ex-BULLETBOYS Guitarist MICK SWEDA Opens Up About His Latest Departure: 'I Have To Be Able To Trust The Guys In My Band'

Original BULLETBOYS guitarist Mick Sweda, who recently exited the band, along with drummer Jimmy D'Anda, discussed his departure from the group in a new interview with "This That & The Other With Troy Patrick Farrell". Speaking about why the reunion of BULLETBOYS' original lineup didn't last more than two years, Sweda said (as transcribed by BLABBERMOUTH.NET): "You go into these things with what I'd describe as hope but it's kind of qualified hope. You know that there's a shelf life, you know that there's a 'use by' date, or at least 'best use by' date, and you just hope it doesn't come too soon. And for me, frankly, it came too soon. I was really looking forward to the year and all the shows we had booked and looking forward to going out and having a great time this summer. We were thinking that the [aborted] Whisky show [on December 16] would be something that would sort of pull us together after a tough 2021 and something that might sort of create bond that would carry over, and alas, that was not to be. We had a couple of guys that were really important to the functioning of the band, namely the manager and the drummer, that decided that they didn't wanna move on and be a part of it. So, essentially my decision was made for me at that point."

Sweda went on to say that he has had no direct conversations with singer Marq Torien since he made the decision to leave BULLETBOYS. "I didn't have to speak with Marq," he explained. "The way that played out pretty much spoke volumes for me, and there was nothing else to be said. My understanding is that he's already looking at putting together a group of fellows to go out and do there dates. My big concern is that when people see Jimmy's picture or see my picture out there, I just want them to know that that is not gonna be the case and they're not gonna see the original band. And there's no guarantee that that artwork and those photos won't be out there representing the gigs as such. So as long as everybody knows what ticket they're buying and what to expect, I'm okay with that."