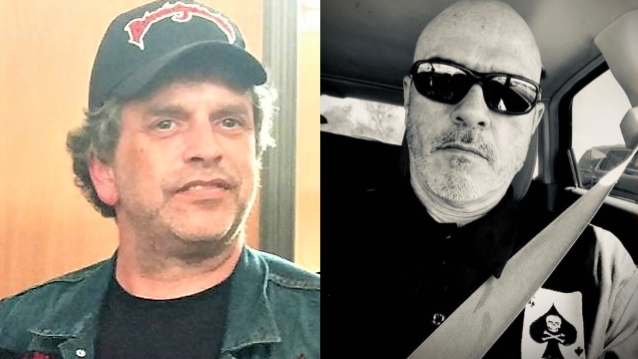 Former D.R.I. bassist Harald Oimoen has apologized to VIO-LENCE singer Sean Killian for saying that he had "no sympathy" for adults who refuse vaccination against COVID-19 and then become sick.

On Sunday (August 22),Killian revealed that he been hospitalized with COVID-19 after contracting he virus "from a friend who was unaware he was carrying it." The 57-year-old musician, who battled stage four liver cirrhosis five years ago, added that his "lung capacity at this time is diminished" and indicated that he "will have a recovery period that will take some time."

Late last night (Monday, August 23),Oimoen returned to his Facebook to write: "I'd like to publicly apologize to Sean Killian for my callous and uncalled for rant !! I've known Sean for 35+ years and even performed at his benefit show !! I should keep my opinions to my self !! I love our scene here in the Bay Area and deeply care for all my friends !!

"This has gotten way outta hand & never dreamed my comment would blow up like this !! I don't know WTF I was thinking .... Life is way too short & fragile to even waste time on bullshit like this !! It was mean spirited & uncalled for ! There is enough schism in the world right now & I shouldn't be making it worse !

"So bummed we lost Eric Wagner who was a way cool guy !

"Get well soon Sean and now we're even for the time you trashed my house with Baloff & Fred Cotton !! Truly sorry brother !"

Oimoen's initial post drew reactions from several other members of the Bay Area metal community, including Killian's bandmate, VIO-LENCE drummer Perry Strickland, who wrote: "We all stand by our choices !and Sean ! 100 [percent]" Former TESTAMENT bassist Greg Christian also chimed in, writing: "In my humble opinion, I don't think this needed to be said. Regardless of the irony. He's a human being, and an old friend - with fragile health to begin with. Why would you want to gloat or take pleasure in him getting sick? What if, God forbid, he were to end up dying from this? How would you feel about this post then? I know, it's social media. I get it. But this whole social media experience is making us all callous. It is what it is, but hey we really should at least try to not celebrate when people we know catch a potentially dangerous disease. Ya know?"

I’d like to publicly apologize to Sean Killian for my callous and uncalled for rant !! I’ve known Sean for 35+ years and...