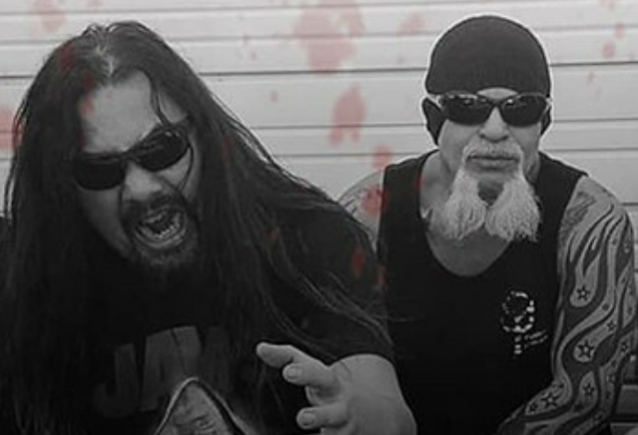 Ex-DEATH and MASSACRE guitarist Rick Rozz has blasted his former bandmate Kam Lee as a "narcissistic revisionist" over the comments the vocalist made about late DEATH frontman Chuck Schuldiner.

In a recent interview with the "That Metal Interview" podcast, Lee, who was a member of an early version of DEATH as well as the pre-DEATH band MANTAS alongside Schuldiner and Rozz, weighed in on the never-ending debate on who can lay claim to being the first "true" death metal band: DEATH or POSSESSED. He said in part (as transcribed by BLABBERMOUTH.NET): "I'll admit this, and I'll say this straight out, 'cause I know there's an argument all the time, who was first — was it DEATH or was it POSSESSED? Well, I will tell you POSSESSED was first, and I will tell you why. Because Chuck heard what Jeff [ Becerra, POSSESSED frontman] was doing and Chuck wanted to emulate Jeff. I was there — I was there in the beginning.

"There was times when we were living here in Florida before Chuck moved to California, and Chuck and I both started off as tapetraders back in the day," Kam continued. "And I remember, if you go back to before we were DEATH, we were called MANTAS. If you look at some of the hand-drawn logos of MANTAS, the MANTAS logo, there's the logo with the devil's tail on it, on the 'M'. That's completely stolen from the original POSSESSED logo, the devil's tail.

Earlier today, Rozz took to his Facebook page to share a link to the BLABBERMOUTH.NET story about Lee's comments, and he included the following message: "SORRY CAN'T LET THIS ONE SLIDE MY FRIENDS, HMMM... BELITTLING THE DEAD, HOW LOW CAN YOU GO? SO... LET ME BE BLUNT, THE REASON THIS P.O.S. NARCISSISTIC, REVISIONIST WASN'T INCLUDED IN THE DEATH BY METAL DOCUMENTARY IS... IN A PRINTED INTERVIEW HE WARNS CHUCK THAT HE BETTER WATCH OUT OR HIS MOM WILL BE SONLESS ONCE AGAIN, REASON ENOUGH? OH... YEAH... AND AT LEAST CHUCK DIDN'T GET ON STAGE AT SHOWBIZ PIZZA IN WHITE SPANDEX WITH LEPPARD SPOTTED LEG WARMERS LIP SINKING TO I WANNA BE SOMEBODY BY W.A.S.P. THAT'S REALLY DEATH METAL BARNEY, TRUE COLORS UNTIL THE END."

Although DEATH is considered to be one of the most important and influential death metal acts of all time, the Florida-based band did not release its debut album, "Scream Bloody Gore", until 1987 — two years after the arrival of "Seven Churches" by California's POSSESSED, whose bassist/vocalist, the aforementioned Becerra, is credited by some with initially creating the term "death metal" in 1983.

Back in 2008, Lee was toying around with the idea of re-recording some of the earliest classics from DEATH and MANTAS with various guest musicians. At the time, he wrote in a social media post: "Like it or not... I'm as much a part of that history as Chuck was, and I wouldn't think to do anything to down play his involvement in these songs. The simple truth is that most of the songs on MANTAS/DEATH's 'Death by Metal' demo '83/'84, DEATH's 'Reign of Terror' demo '84 and DEATH's 'Infernal Death' demo '85 — and many rehersal tapes released during this time — we're both lyrically written be me, and sung by me. Yes, both Chuck and Rick wrote the guitar riffs, but I wrote the drum patterns to these songs and the lyrics to most of these tracks. That's the simple truth to it!"

MASSACRE parted ways with Rozz and drummer Mike Mazzonetto in September 2019. At the time, Lee and Borders blamed the split on "contract infringement violations," "poor performance, incompetence, and lack of professionalism."