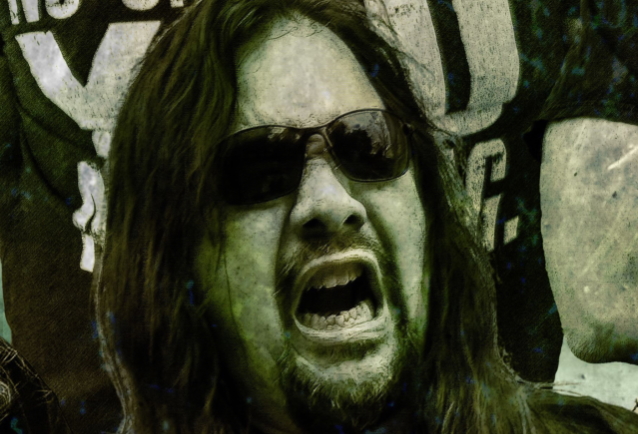 Although DEATH is considered to be one of the most important and influential death metal acts of all time, the Florida-based band did not release its debut album, "Scream Bloody Gore", until 1987 — two years after the arrival of "Seven Churches" by California's POSSESSED, whose bassist/vocalist, Jeff Becerra, is credited by some with initially creating the term "death metal" in 1983. In a new interview with the "Fantasm" podcast, Kam Lee, who was a member of an early version of DEATH as well as the pre-DEATH band MANTAS alongside guitarist/vocalist Chuck Schuldiner and guitarist Rick Rozz, once again weighed in on the never-ending debate on who can lay claim to being the first "true" death metal band: DEATH or POSSESSED. He said (as transcribed by BLABBERMOUTH.NET): "POSSESSED came first, because we all heard the POSSESSED demo in the tape trading. We were tape trading and we got the POSSESSED demo. And there's where you can hear the change, because we were sounding different — we were sounding very much like VENOM in the first MANTAS demo; very, veryVENOM cloning. As soon as we heard that POSSESSED demo… It was two bands, actually, that literally changed everything in DEATH — the POSSESSED demo and SLAYER's 'Show No Mercy'. Those two things right there changed everything. Because once we heard SLAYER's 'Show No Mercy', as far as the speed and aggression, and we heard POSSESSED, as far as the technicality of the guitars and the way that Jeff was singing, that's when we changed. We said, 'Okay, we need to be a combination of all three of these — we need to be a combination of the rawness of VENOM, the fast energy of SLAYER and that just evil, screechy and guitar ripping ways of POSSESSED. That literally was it. There's the three bands that are the blueprint of death metal, as far as I'm concerned."

A little over a month ago, Kam was asked to elaborate on his recent comment during an appearance on "That Metal Interview" podcast that "Chuck ripped off POSSESSED"

"I guess that was actually a bad choice of wording," Kam admitted to VWMusic. "Saying 'ripped off' makes it sound bad. I guess the proper wording should be 'took heavy influence from.' Although you could say that I ripped off HELLHAMMER and Tom G. Warrior, and I'm not going to get butthurt about it. I won't because it's fact. Yet some people don't care about facts. They just want to keep believing the fiction they bought into because it fits the messianic mold their 'hero-worshipping' icons have been fitted for. It disrupts their ideology and topples the tower when they hear their gods might not be as almighty as they once believed. It's that same sunken feeling when a kid for the first time is discovering that just maybe Santa Claus is not real. It hurts their feelings. Worse yet are those others out there manipulating those people who are hurt. Some people are just trying to jump on the pity party bandwagon with that one."

He continued: "I got a lot of hate from that statement, though it wasn't intended to downplay Chuck's influence on music, but rather to end the debate of who came first, DEATH or POSSESSED. Sadly, morons spun it to change the narrative, to fit their agenda, and to further instigate and cause strife."

Lee added: "Do I feel Chuck's influence is overstated? Let me put it this way — for the 'product and commodity,' his legacy became post mortem. In order to keep reselling and repressing albums, it's exactly what it's being marketed as. No, it's actually exactly what one should expect from a product sales pitch. I mean, you've got to make sure that your product is the people's choice, right? It's Coca-Cola vs Pepsi. McDonald's vs Burger King. Starbucks vs Dunkin Donuts. In the end, the company with the better commercial is always going to win over the masses."

In a recent interview with the "The Haunting Chapel" podcast, Becerra, who was shot in a robbery in 1989, leaving him partially paralyzed and wheelchair-bound, weighed in on the "DEATH vs. POSSESSED" debate. He said in part: "We [POSSESSED] were selling ourselves as a death metal band, and that was what we went with. And to this day, it's both a blessing and a curse because it's highly debated and contested. And we literally, after I got shot, certain revisionists tried to block me out of history. The POSSESSED Wiki is the most vandalized page of Wikipedia. There was a certain person — he recently passed away — that was just relentlessly retitling our YouTube, moving our dates forward, messing with the timeline. It was like a battle. When I left, we were the death metal guys. When I came back, it was no more. So I had to fight for my own history back, which was weird. 'Cause there's no cool way to do that, because it sounds like you're tooting your own horn.

"I'm not saying I created death metal; I'm saying POSSESSED was the first death metal band," Jeff explained. "And it's a bone of contention with many DEATH fans. And because of the way that their management spun it and the way that the magazines spun it… Remember, me and Chuck [Schuldiner, DEATH guitarist/vocalist] were friends. He literally was like my protégé. He moved out to Antioch [California from Orlando]; he lived at the [house of the then-]POSSESSED fan club [president Krystal Mahoney]. He was pen paling for a while and tape trading. And he very much modeled himself after me. I was so honored because, remember, I'm just a young teenager. But he was the first person to really get what we were doing, what I was doing, and he was the first person that really understood what it was about. And he was so smart that way because it was undefined and so hard to explain what it is, without putting rules on it, because the last thing you wanna do is put rules on anything and stifle it. But he would just grasp it; he loved it. He said, 'Listen, Jeff. I sound just like you.' And he was proud of that. And I was proud of him. And there was a bromance going there. It was a respect.

"I've never been jealous of another band," Becerra clarified. "I've never claimed anything that wasn't mine. And it's just so obscure to see people trying to claim what they know they wouldn't do in front of me. They know what they didn't do; I was fucking there. And I'm not hating on anybody, but it's a very coveted position.

"What makes me mad is when the magazines spin this 'DEATH or POSSESSED, DEATH versus POSSESSED.' And it even tainted the relationship between DEATH and POSSESSED, and that pisses me off, because we were friends.

"I realize that metal is supposed to be fun," Jeff added. "But there's also something very valid about true history and not revising stuff — not just with POSSESSED but any band. And the way it's spun is, like, bands will exaggerate what they did and the writers will be eager to impress who they're writing about, because the last thing a writer wants is for the band to go, 'This is fucking fucked up.'

"In the old days, it was very truthful. People did their research. They didn't have clickbait. There was no 'POSSESSED versus DEATH.' I hate that shit. Because if Chuck was alive today, I'd like [us to] collaborate. And I don't like it fucking with my remembrance of what it really was. I like the history. Maybe I'm being weird about it, but I think that the truth is so much better than the tale."

Schuldiner died in December 2001 after a battle with pontine glioma, a rare type of brain tumor.

Two years after POSSESSED's split, Becerra was the victim of the aforementioned failed armed robbery attempt, sending him into a spiral of drug and alcohol abuse. POSSESSED was reactivated by Torrao in 1990 with a completely different lineup, but only released two demos before dissolving in 1993. Becerra then reformed POSSESSED in 2007 with his own lineup, which released its first studio album in 33 years, "Revelations Of Oblivion", in 2019.