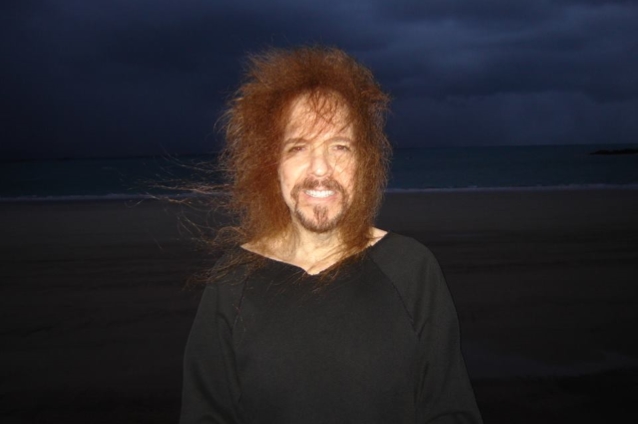 Former DIO keyboardist Claude Schnell has once again denounced the Ronnie James Dio hologram, saying that it "it isn't about" the singer anymore.

Schnell, who joined DIO in May 1983, after the "Holy Diver" was released but before the accompanying tour was launched, offered his opinion on the holographic version of Ronnie during a lengthy interview with The Metal Voice.

"I won't presume to tell you what I think about what certain people are doing with his memory, but it just seems to me that it isn't about Ronnie anymore," he said (hear audio below). "They can say it's about keeping him and his music alive, but nobody ever made holograms of THE BEATLES, and their music is still alive. I think their decision is based on more pragmatic concerns, I'll put it that way. You've got a bunch of guys who can't find gigs, they're managed by the same woman who has contacts all around the world with agencies and promoters, and what could be a more natural thing than taking the out-of-work musicians and putting 'em on tour and making a little money while you're at it? Don't get me wrong — not to take anything away from these guys; I mean, they all do a great job, and if the fans are happy about it, that's all that matters. But you're not asking me what the fans think; you're asking me what I think."

During The Metal Voice interview, Schnell called "Sacred Heart" a "transitional" album for DIO, saying: "If you think of the band, when things are good, as a tight knot where the ropes are all firmly together, by the time 'Sacred Heart' was being recorded, the knot was loosening.

"We all felt that Viv was really treated very badly — not so much by Ronnie. But it was obvious that those decisions were being handled, for lack of a better word, by Wendy [Ronnie's then-wife and manager]," he continued. "Viv was basically set up and he was put in the position where the only thing that he could do was the exact thing that would get him kicked out of the band. And when it came to pass, Wendy was chomping at the bit to walk Craig [Goldy, Vivian's replacement] into the band. And Viv just got very unceremoniously let go — in my humble opinion, for no real fault of his own."

Schnell went on to say that he wishes the original DIO lineup had lasted longer and collaborated on more music beyond the first three albums. "I think the best move for Viv, I think the best move for all of us would have been had we stayed together, had Wendy been willing to allow a more equitable split so we could all have a living wage and allow the band to develop the way bands used to develop back in the day before it became all about the money," he said.

Schnell recently called the Ronnie James Dio hologram a "travesty" and "disrespectful" to the singer's memory. He went on to describe it as "cheesy" and added that he couldn't understand how Wendy could be "okay with it."

Wendy Dio, who is a member of the Eyellusion team, said that the people that criticize the Ronnie James Dio hologram should at least see it in person before voicing their disapproval. "Don't criticize it if you haven't seen it," she told "Whiplash", the KLOS radio show hosted by Full Metal Jackie. "It's done with love. The band love doing it. And we just wanna keep Ronnie's memory and his music alive."