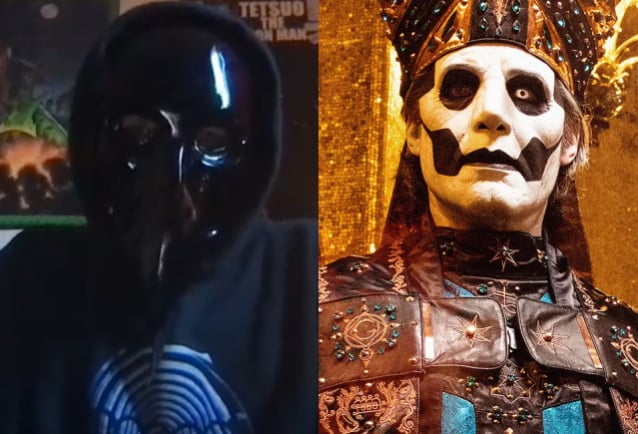 In a new interview with Rocking With Jam Man, PRIEST vocalist Linton Rubino, who played bass in GHOST as one of the Nameless Ghouls under the stage name Water, was asked if it was hard for me to be in a band like GHOST knowing that he was just a "cog in the machine" and that he could be replaced at any time. He responded (as transcribed by BLABBERMOUTH.NET): "Actually, that wasn't the case when I was in the band, 'cause there wasn't a culture of being changeable. When I was in the band, it was very clear that it was a band and nobody was a hired gun. So nobody felt that you were gonna be replaced all the time. Because the bass player before me, he quit by himself because of personal reasons. And then I got the chance to join the band — and not as a hired gun. I really thought I was a member of GHOST when I [was] in GHOST. After that, and after all the other stuff that happened, then that perception, I think, [was] changed, and now everybody believes that there was one boss and everybody was hired. But at the time, that wasn't the feeling or the culture that was in the band; it was more like we are one band. Maybe one person had more to say about the creative stuff and the business part of it, but we were still one band. So I didn't have that feeling [that I was just a hired gun]. Now I can understand, if you're a Ghoul today, you must have another view of it. But not back then, actually."

Linton also talked about his recent comment that he had to undergo six months of therapy after getting fired from GHOST. Asked how he is doing today, he said: "I'm doing just fine. And when I said that, it really sounds like I was in some kind of institution. I wasn't. It was only half an hour, once a week, and it was not only about GHOST or being fired; it was the whole life situation. It was a big change just to not have a job anymore and to be at home, not knowing what to do. I think everyone going through something like that, it's good to talk to someone. And I think it goes for everyone. I recommend it. But it took one or two months. I was back on track pretty fast. It was no big deal, really. I'm doing just fine today. Remember, this was seven years ago, so it's a long time ago. I don't think about it so much, to be honest."

Asked if the "media" took his comments about needing therapy a little "too far," Linton said: "Whatever works. All P.R. is good P.R., as the saying [goes]. And if we can sell some more [copies] of [PRIEST's new album] 'Body Machine' because of that, that's a good thing in the long run. But I wasn't institutionalized or anything. I had a therapist I went to once a week for half an hour. It was a very simply procedure… I wasn't locked in — never. It was only conversation — no medicines or anything like that. It was only conversations — half an hour, once a week."

Earlier this month, Linton told Dr. Music that he wasn't involved in the 2017 lawsuit filed against GHOST leader Tobias Forge by four former members of the band after being dismissed by the group's founder the previous December. "I was fired in 2015 from GHOST, so I wasn't a part of that process. But I have a family member and a close friend that was in that process, in the trial," he said, apparently referring to his father, Mauro Rubino, who was the keyboardist Air in GHOST from 2011 until 2016, and Simon Söderberg, who played guitar for GHOST from 2010 until 2016. "So, yeah, I was involved emotionally, you can say. But otherwise from that, I wasn't a part of that process."

Asked if it was difficult to deal with the fact that nobody knew his identity while he was in GHOST and he had to virtually start from scratch again once he was out of the band, Linton said: "I actually went through therapy for six months after that 'cause I felt that I'm nobody. We were up there playing with METALLICA and IRON MAIDEN and everything, and they know who we are, all the people backstage know who we are, but nobody else [does]. So it was just like being up [at the top] and then you're basically [on your own once you are out of the band]. And then I didn't have a job or anything and then it was cold turkey money-wise. So I had to really restart from bottom. Every breakup takes a while, right?! Then you're back on track in a couple of months. And you just roll up your sleeves and get at it again. You don't have much of a choice."

The original lawsuit, which was filed in the district court of Linköping, where GHOST was originally based, claimed that Forge solely controlled the band's business affairs without input from anyone else in the group. The four musicians furthermore stated that a partnership agreement existed between them and Forge which put Tobias in charge of carrying out the company's management duties.

In June 2017, Forge filed an official response to the lawsuit, claiming that "no legal partnership" ever existed between him and the four musicians regarding the activities of GHOST and explaining that "none of the plaintiffs were present at the time of the" group's formation and that their sole task was to "perform" and "execute" the musical works and the image that Forge had created, produced and decided, all according to his instructions. For their efforts, he said, the musicians were paid a fixed salary.

In August 2017, the four ex-GHOST members presented an answer of their own, dismissing Forge's claim that GHOST is a solo project as "not [being] in accordance with the truth." "Forge has certainly been the band's main songwriter, he has had the role of the band's cinematic front figure 'Papa Emeritus,' has been a driving force in the band's business, as well as in the handling of the band's business affairs," the musicians wrote. "However, the activities carried out with respect to GHOST were extensively handled jointly by the members — for example, by making decisions jointly regarding the band's image, by participating in interviews, and by the fact that every member has, at certain times, contributed when recording the band's albums and singles and by touring together almost continuously since 2011."

The four ex-members, known previously only as Nameless Ghouls, claimed that between the years of 2010 and 2016, Forge never told them that he viewed GHOST as a one-man business and solo project. "To the contrary, Tobias Forge has always emphasized that it was a collaboration that everyone was involved in and would share in the profit of once the business became profitable," they wrote. "The first time Tobias Forge, through the band's management, mentioned that he saw them as hired musicians rather than full-fledged members of GHOST was in the context of a contract proposal presented in April 2016." This proposal was later rejected.

The trial in Linköping District Court lasted for six days, and on October 17, 2018, a 108-page decision was released dismissing the case. The four former GHOST members were also ordered to pay Forge's legal fees, which at the time was said to be approximately $146,000.

In February 2019, an appeals court rejected the former GHOST members' argument that the judge who ordered the dismissal of their lawsuit against Forge had a conflict of interest in overseeing the case.

In May 2018, Linton blasted GHOST's then-latest album "Prequelle", saying he was "ashamed to have been part of that" and calling the music "a joke" and "mainstream shit."