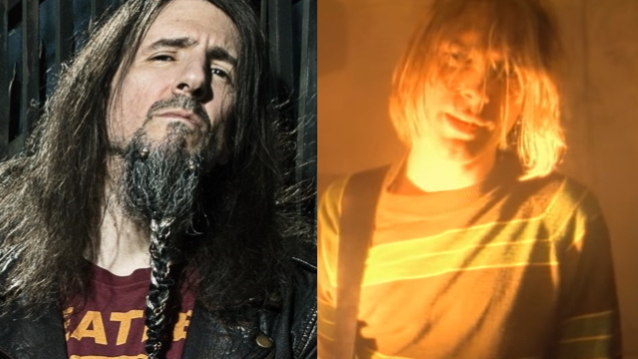 In a recent interview with "I Ask No One With Kevin Re LoVullo", former GUNS N' ROSES guitarist Ron "Bumblefoot" Thal spoke about how he was influenced by the playing and songwriting style of late NIRVANA icon Kurt Cobain. He said (as transcribed by BLABBERMOUTH.NET): "His guitar was the way to dig in and dirty it up and just deliver it. And his voice. But what I loved about Cobain was really the writing — the songwriting. I'm assuming it was intuitive. But he did the same kind of shit that [famed composer Johann Sebastian] Bach would do, as far as mathematically correct and accurate and phrasing things to land on the changing foundation beneath it so that it is always in perfect harmony. Whether it was studied or he just knew, he just heard it, but he did that — absolutely. I could spend the next hour just breaking it down and all the music theory [behind it]… If you were gonna take the math behind the music of why things work, his stuff all added up."

Thal joined GUNS N' ROSES in 2006 and appeared on 2008's "Chinese Democracy", an effort which contained music that had been written before he came into the group. The disc took 13 years to make and was only a modest seller, moving just around half a million copies.