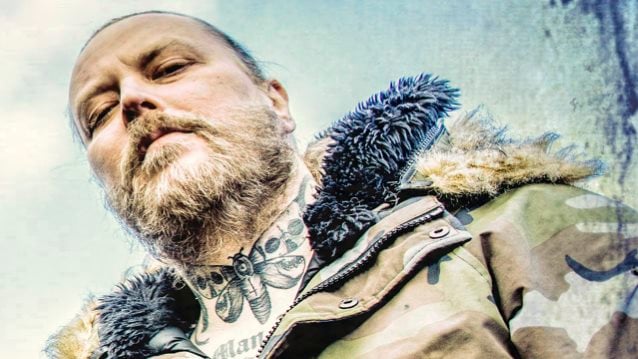 Strömblad, who quit IN FLAMES in February 2010 in order to continue receiving treatment for his alcohol addiction, made his latest comments while promoting the debut album from his new band CYHRA, in which he is joined by former IN FLAMES bassist Peter Iwers, ex-AMARANTHE singer Joacim "Jake E" Lundberg and LUCA TURILLI'S RHAPSODY drummer Alex Landenburg.

Asked by Metal Wani for his opinion on IN FLAMES' latest album, last year's "Battles", Jesper said (hear audio below): "To be honest, I think they should actually change the name, because it's such a huge, huge difference from the beginning. But if that's the way they wanna do it, fine. And they're happy with the new members, so good luck to them. Everyone is in the right place."

Strömblad went on to clarify: "I didn't say that 'Battles' sucks ass — that's not what I said. It's just it's very… They have developed so much in a [different] direction."

According to Strömblad, some of the albums he made with IN FLAMES continue to be unfairly criticized by the band's fans, many of whom still expect the group to make new music in the vein of its more obscure earlier material.

"I think that 'A Sense Of Purpose' [2008] is a very underrated album, actually," he said. "'Cause I think that had all the elements that IN FLAMES is about, but it got so much shit [from the fans]. It's [viewed as] the worst album, if people vote [for the top album in IN FLAMES' discography]. They hate it, and I can't get that, actually."

After leaving IN FLAMES, Strömblad initially formed THE RESISTANCE with Marco Aro (vocals, THE HAUNTED) and Glenn Ljungström (guitar, ex-IN FLAMES). Strömblad announced his departure from that group in March 2016, with the band's bassist, Rob Hakemo, saying in an interview that Jesper "saved" THE RESISTANCE by quitting and explaining that the guitarist is "an alcoholic" and "drug addict" who "doesn't want to [get] sober." Rob added: "[Jesper] thinks that two weeks [sober] is good, and then he can drink some. And then he's gone for a month, and then he's back and he's not drinking [for a short while]. It's a sad thing, and we really tried to help him and wanted the best [for him]. So when he told us that 'I'm leaving the band,' we were relieved. We were really relieved."

"Battles", IN FLAMES' twelfth studio album — and its third since Jesper's departure — was released in November 2016 via Nuclear Blast in all territories excluding North America and Scandinavia and Eleven Seven Music Group in the U.S.

CYHRA will release its debut album, "Letters To Myself", on October 20 via Spinefarm Records. The disc was recorded at Top Floor Studios in Gothenburg, Sweden.