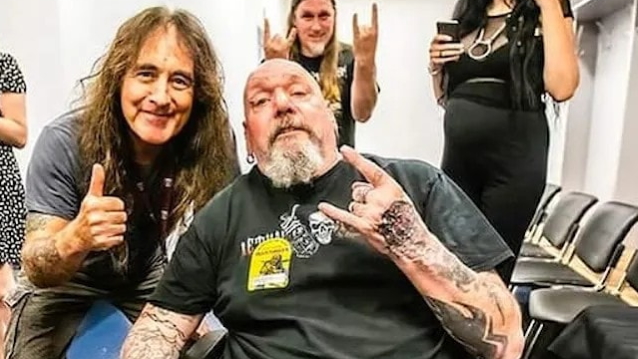 This past May, former IRON MAIDEN singer Paul Di'Anno came face to face with MAIDEN bassist Steve Harris for the first time in three decades before the band's concert in Croatia.

Harris, whose group kicked off the 2022 leg of its "Legacy Of The Beast" world tour at the 22,000-capacity Arena Zagreb, came out before the show to greet a wheelchair-bound Di'Anno and chat with him for a few minutes. Di'Anno also had a short discussion with MAIDEN's longtime manager Rod Smallwood, who was traveling with the group.

Asked in a new interview with Sakis Fragos of Greece's Rock Hard magazine why he would take the time to meet with Harris and Smallwood when he had been critical of the two of them in the past, referring to Smallwood as "Rod Smallwallet" and comparing Steve to Adolf Hitler, Di'Anno responded (as transcribed by BLABBERMOUTH.NET): "I never called [Rod] Rod Smallwallet. A journalist called him Rod Smallwallet, and we thought it was all funny, so everybody in IRON MAIDEN called him that, 'cause it used to piss him off. So that's the end of that one.

"I did call Steve Hitler once. [Laughs] Because of the way he runs [the band]," Paul explained. "It's like a fucking army. He's so focused. And I couldn't think of another one person to [compare him to]. I said 'Hitler' [but] I didn't mean it in that way."

Looking back on the circumstances that led to his departure from MAIDEN and whether it's true that it has something to do with his vocal performance, Paul said: "My record stands for itself. I've played more shows than IRON MAIDEN have ever played… They play a lot of concerts, but I played a hell of a lot more than they ever had. So it was nothing to do with my voice. It was nothing to do with that. I was just upset about certain things, which were private things in the band. And the way I dealt with them maybe was not right, but I dealt with them. And that's the end of it. And that's as much as I'm gonna say."

Di'Anno, who had been receiving physiotherapy and lymphatic drainage treatments in Croatia, finally underwent his knee surgery on September 12. Asked if the MAIDEN camp assisted him with any of the costs involved with his medical treatment, Paul said: "Yes, they did. Towards the end. It was very kind of them. What happened was we were almost there, but there was quite a bit of more money needed for surgeries. 'Cause it's all privately done as well; that's how you get better attention. And IRON MAIDEN just called in, their administration called in, and said, 'We're gonna take over the rest of it now. So we'll pay for the final parts.' And all of it is important, but obviously the final part is the final part. There's still a few more little issues to deal with, but [we're almost there]. [So] thank you, IRON MAIDEN, and most of all, thank you to the fans."

Pressed about whether it's true that he wasn't properly compensated for his work on the first two IRON MAIDEN albums, Paul said: "I have nothing to comment on that at all, because, to be honest with you, it's nobody's damn business. I got paid very well. I'm very happy with that. See, if I try to say, 'Oh, IRON MAIDEN didn't pay me enough money,' it's a bad reflection on IRON MAIDEN. And I'm not taking that. I got paid very well. They looked after me. End of story."

Di'Anno made the aforementioned "Hitler" comment during a 2009 press conference in Argentina where he was asked about the rumors that his drug use had something to do with his split with MAIDEN. "Where the fuck do you people get this from?" he asked. "I left IRON MAIDEN because they were going too heavy metal, and IRON MAIDEN is a money-making machine, and I don't give a fuck about it. It was not about drugs; it was nothing like that. Me and Steve... I [wrote] the song 'Killers'. Steve had [what he thought] were better songs. I thought his songs were shit. Nothing to do with drugs; nothing whatsoever. Check your facts or otherwise this interview is over... I hate that! I fucking hate that! Because people... You say something but you don't know. Well, I'm telling you. IRON MAIDEN is Steve Harris's band. It doesn't matter about anybody else — whether it's Dave Murray, Clive [Burr], me... it's Steve Harris's band and all it is is money, money, money, money — nobody else counts. And I wrote fuckin' 20-times better songs than his, but I only got one song on the 'Killers' album because it's Steve's — he must have this. Fuckin' Adolf Hitler. I'm not interested. So there you go. But you need to take drugs when you're with IRON MAIDEN because they're so fucking boring. And the only drugs were aspirin, because Steve [making hand gesture as if someone is speaking into his ear]... Fuckin' headache."