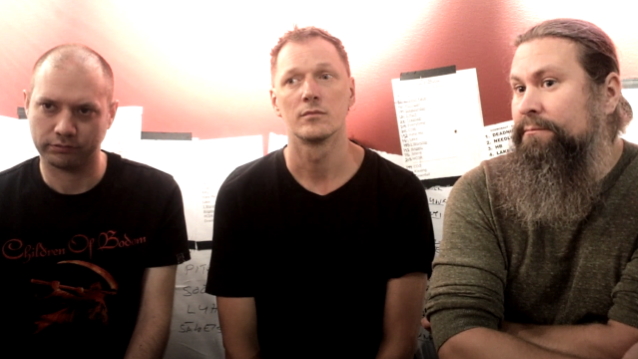 Three former members of CHILDREN OF BODOM — Jaska Raatikainen (drums), Henri "Henkka T. Blacksmith" Seppälä (bass) and Janne Wirman (keyboards) — officially opened their own bar and a band museum this past Thursday, November 10 in Espoo, Finland. In addition to serving as an "unholy concoction of a hard rock café and a dive bar," Bodom Bar & Sauna is offering visitors a chance to experience the Finnish sauna culture, which is considered an integral part of the lives of the majority of the Finnish population.

In a new interview with Tuonela magazine, Janne, Jaska and Henkka were asked what the experience was like for them, while putting the bar together, to look back on the entirety of what they did as a band.

"Well, it's been emotional, you know, digging up old stuff and putting it up on our walls and thinking about [late CHILDREN OF BODOM frontman] Alexi [Laiho]," Janne said. "I stop at pretty much every item [and] I think about Alexi and about his relation to all this stuff. It's been very emotional the past couple of days."

Added Henkka: "And it's been so cool to be in very close touch with Alexi's family, Alexi's sister about this, they've been super supportive of everything we do. They gave us some of Alexi's personal items to put here."

Continued Janne: "And we wouldn't do anything without asking them."

In addition to regular bar facilities, Bodom Bar & Sauna features displays of gear and memorabilia from across CHILDREN OF BODOM's career, as well as a spa, which is comprised of three sauna rooms.

When the new business venture was first announced in September, Raatikainen, Seppälä and Wirman wrote in a joint message: "We toured actively from 1998 until 2019. We have visited a bar in almost every town we ever played in. From Hard Rock Café Tokyo to a dive bar in the outskirts of Milwaukee. Everything from the legendary Rainbow Bar and Grill in West Hollywood to the Crobar in London UK.

"Almost everyone in our profession dreams of opening their own bar at some point and we were no exception. When the active career of COB was already coming to an end we started looking into it a bit more seriously. We had a warehouse full of memorabilia and we thought that a lot of people would want to see some of this stuff that used to be and still was very meaningful to us and the career of the band.

"A thought of a museum felt a bit foreign but an idea of a bar that works as a museum displaying our gear and memorabilia seemed quite natural at this point. We had almost given up on this dream when the power duo of Jykä Peltonen and Kimmo Helistö emerged and were ready to provide us with their know how in the matter. Together we will build this unholy concoction of hard rock café and dive bar with a lot of BODOM in it. The new HQ of COB will combine a museum and a bar but also include the possibility to experience the Finnish sauna culture. Situated naturally in Espoo only a stone's throw away where the band started their career.

"Bodom Bar & Sauna is being built in Espoo into a location with easy access to a Metro station. The establishment will also include three saunas. There will be no entry fee to the Bar and no age limit. There will be a fee for the sauna experience."

Alexi and Raatikainen founded CHILDREN OF BODOM in 1993, and the band was one of the most internationally acclaimed metal acts in Finland up until their very last farewell concert in December of 2019. In 2020, Alexi put together BODOM AFTER MIDNIGHT, which recorded three songs and shot one music video, all of which were released posthumously.

Earlier this year, Raatikainen, Seppälä and Wirman discussed publicly for the first time the circumstances that led to CHILDREN OF BODOM's split and ultimately Laiho's death. In an interview with Finland's Helsingin Sanomat, the three surviving members of CHILDREN OF BODOM said the real reason for the band's breakup was not that they wanted to stop touring in order to spend more time with their families, which is how Laiho explained it to Helsingin Sanomat in November 2019. Instead, what caused the group to split was Laiho's substance abuse, and that is also what eventually killed him a year after they went their separate ways.

Yesterday we had so much fun at the unofficial opening of BODOM BAR & SAUNA in Espoo! Jaska, Henkka and Janne also took...

Closing down the first official night of @bodombar public opening yesterday🔥 thank you Jaska and Henkka for being so...

It took 25 years of collaboration and friendship before they opened a local bar and sauna for me in my neighbourhood...

Posted by Mika Jussila - Mastering of the Universe on Wednesday, November 9, 2022