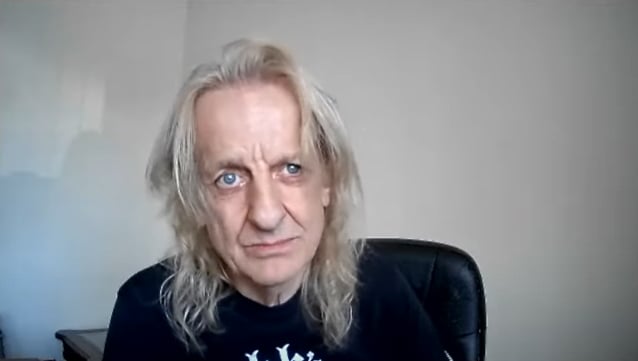 In a new interview with Kylie Olsson's YouTube show "Life In Six Strings", former JUDAS PRIEST guitarist K.K. Downing discussed his role with one of the oldest and most famous bands synonymous with the creation of heavy metal, along with BLACK SABBATH. He said (as transcribed by BLABBERMOUTH.NET): "Bear in mind, I'm this young kid, just a young teenager, wanting to hear more of this music that I heard little bits of, but I was very hungry and frustrated that I didn't have enough of it, that I was compelled to create it. Because it didn't exist. Because I wanted more of it. I figured, 'Okay, I'll sit down and write the music that I would wanna listen to and hope there's lots more people out there like me that will [relate] to this music that will do for us — white working-class kids — it'll do for us what the blues music did for the people that were suffering, and it helped them through their working-class [struggle] and their oppression; maybe this music can do the same for us. And that's what heavy metal is, to me, around the world. And it brought us all together because we can all relate to it. So it's a very, very interesting subject. And it's why it's being created, because if you don't have the creators, you're not gonna have the audience that are gonna decide, 'I like that.' So you have to create it first. So, to me, we had, outside of the great progressive blues bands, we had… The next step of JUDAS PRIEST, BLACK SABBATH, SCORPIONS, UFO, ACCEPT… So you have all of these bands, and eventually, the new wave of them, whoever that might be, starts to come in as well, and obviously, you had IRON MAIDEN, SAXON and you had the next level of so-called New Wave Of British Heavy Metal bands. So this is the interesting concept. This is why I'm glad and feel so blessed to be born in '51. The beginning of heavy metal had to happen just around about the time that I was, like, 16, 17, let's say, 18, to wanna be able to create this for other people to wanna be able to listen to it."

Last summer, Downing, who has spent the last few months promoting the debut album from his new band KK'S PRIEST, discussed his five-decade relationship with the heavy metal genre in an interview with El Cuartel Del Metal. He said: "I owe everything — my whole life and my whole being — to metal. Because I was there at the very beginning when it didn't exist, and heavy rock didn't exist. Even rock didn't exist, really. We had rock and roll in the early '60s, but that was different; that was kind of Bill Haley and Elvis [Presley] and Chuck Berry. But we didn't have rock. We had blues, which turned into progressive blues, and that was great. There were so many great progressive blues bands. But we didn't seem to have the music that I really wanted more and more of. And so I set on the journey to try to be a part and create and assist as much as I could."