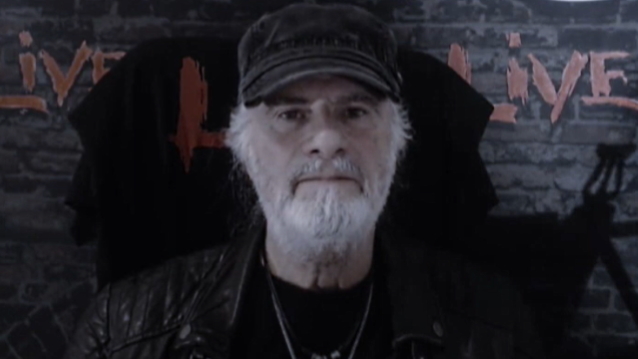 KROKUS Singer Has No Regrets About Turning Down AC/DC Audition: 'I Wouldn't Change A Minute'

KROKUS singer Marc Storace says that he has no regrets about turning down a chance to audition for AC/DC more than four decades ago.

The 70-year-old Maltese-born vocalist — whose band had opened for AC/DC in the past — passed on the opportunity to try out to replace the late Bon Scott in 1980.

In February of that year, Scott died of acute alcohol poisoning after a night of heavy drinking at a club in London, just days after attending a session with Malcolm and Angus Young where they began working on music for what became the "Back In Black" album.

"Back In Black" was the first album AC/DC released after singer Brian Johnson replaced Scott, and it went on to become the third-biggest-selling LP of all time.

Asked in a new interview with Barbara Caserta of Italy's Linea Rock if he ever wonders what could have been had he gotten the AC/DC job, Storace responded (as transcribed by BLABBERMOUTH.NET): "That's a hypothetical question. It's all open to fantasy and dreams, but reality can take a different direction. And at that moment, I thought, 'Well, I'm sitting on my high horse, enjoying success with KROKUS.' My debut album [with KROKUS], 'Metal Rendez-Vous', went like a rocket. We did 'Hardware' and we had, actually, a brand new light show, which arrived from Birmingham. And the CEO of that company in Birmingham — the whole hard rock scene, the center was Birmingham; LED ZEPPELIN and everyone else, and AC/DC, they were all doing their production stuff there. And the guy took me to the side, the CEO, because he drove down to show us this new light show computer, which we'd never seen one like that [before]. And then he took me on the side and he said, 'Would you like to audition for AC/DC?' And I said, 'Steve, I'm so happy here. Things are happening, and we're gonna go places. And these are my new mates.' I had a kind of loyalty. I was really thankful that I joined KROKUS because it suddenly happened. And I had been trying in many different ways. And even with [Swiss progressive rockers] TEA, though we had enjoyed an amount of success, it was nothing like what we achieved later on with KROKUS. So, looking back at this little guy in Malta, where there's no record companies, no big rock and roll life and no tours the way I dreamed of and everything, and looking at Switzerland, where actually it's more known for the banks and the chocolates and the watches than hard rock bands, and seeing how far that KROKUS got to, I think we should be thankful. And that's the way I feel; I feel thankful for what I've achieved with these guys."

He continued: "The thing about AC/DC is it's not realistic to think that way, when you think why I decided that way. And I wouldn't change a minute. I'm happy. I have a loving wife. I have two beautiful children. They're intelligent. They're doing their own thing. I have my own house. I'm an ambassador for [the French car company] Peugeot. It's great to be alive. And that's why I'm doing my solo album. And I don't wanna stop."

Six years ago, Storace said that he would "certainly" accept an invitation to step in for Johnson after the AC/DC frontman was advised by doctors to stop touring or risk total hearing loss.

Marc admitted in a previous interview that he initially had some understandable reservations about being repeatedly compared to Scott, feeling he was being "branded as a copy of somebody who, at the time, I didn't even know that well." But he eventually started seeing things differently. "Today, I look at is as a big compliment. I think he probably had many of the same idols I had, and we were both gifted with the same vocal tonalities."

Back in 2000, Storace released an album with a project called DC WORLD in which he sang Bon Scott-era AC/DC songs. Audio samples from that effort can be heard in a YouTube clip below.

Storace's first-ever solo album, "Live And Let Live", was made available in Switzerland in December and was released in North America earlier this month.