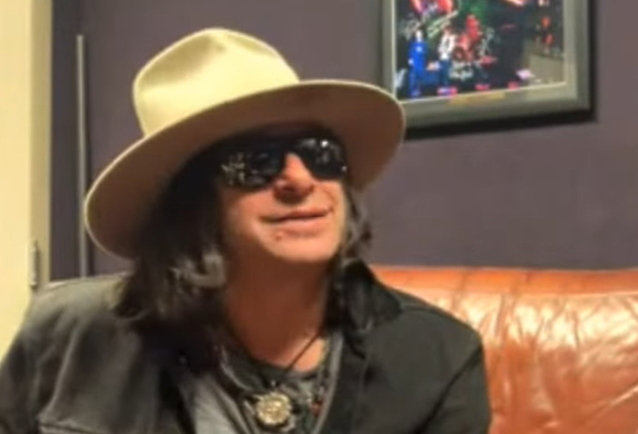 RILEY'S L.A. GUNS bassist Kelly Nickels, who was a member of L.A. GUNS' "classic" incarnation, spoke to Waste Some Time With Jason Green about the out-of-court resolution which was reached in April 2021 in the legal dispute over the rights to the L.A. GUNS name. Under the terms of the settlement agreement, guitarist Tracii Guns and singer Phil Lewis are continuing to operate under the L.A. GUNS trademark, while drummer Steve Riley and his bandmates from the other version of L.A. GUNS are now operating under the new name RILEY'S L.A. GUNS.

Regarding the disparaging comments that Lewis and Guns have made about RILEY'S L.A. GUNS in recent months, Nickels said: "The reason we don't ever say anything negative about them is that I don't want the fans to think that everything about L.A. GUNS is negative. I can't have that side being negative and this side being negative. I don't want it all to be negative about the band; there has to be a positive side about it. That's why we're not gonna take the time and be involved in [a war of words].

"[RILEY'S L.A. GUNS is] a hobby at this point," Kelly clarified. "We get together every few weeks; we do a show. We're just trying to have fun and play music and songs that we worked on that are part of our history. We needed to keep L.A. GUNS in the name somehow, or else we have nothing. And for Steve, who's been in the band [for] 30-something years, to walk away from that… he wouldn't do it. We'd rather not do it. So we worked it out. We put 'RILEY'S' in it. We were all cool with that; we don't care. At least the fans know. This is what's happening now. We're here [playing] tonight with GREAT WHITE," he added, referencing another group which has gone through a legal dispute over its name]. "There's a lot of bands it happens [to] after 30-year careers; some people drift apart and things happen.

"I just don't want to be surrounded by negativity and I want there to be positivity for some part of it," Nickels added.

RILEY'S L.A. GUNS features Riley and Nickels alongside Orlando, Florida-based guitarist/vocalist Kurt Frohlich and guitarist Scott Griffin, who played bass for L.A. GUNS from 2007 until 2009, and then again from 2011 to 2014.

RILEY'S L.A. GUNS will release a new single, "Overdrive", digitally on October 21 via Golden Robot Records. The track is taken from the band's upcoming sophomore album, "The Dark Horse", tentatively due mid-2023.

In May 2021, Guns discussed the resolution in an interview with The SDR Show. He said: "We ended up settling in a way where, basically, [Steve] licenses the words L.A. GUNS for free; I'm not even asking for a percentage of when he plays. I'm just saying, 'Hey, I could have taken your house. I could have taken anything you own. But I don't want you to die in the street, and I don't want you to be poor.' And I really love his son, Cole. It just got to the point with all this litigation…

In a separate interview with Sonic Perspectives, Guns addressed the fact that Riley's version of L.A. GUNS played at the M3 Rock Festival in 2019 and released a full-length album under the L.A. GUNS name, 2020's "Renegades". He said: "Dude, when they did those couple of shows, we got so much angry e-mail from our fans. People were, like, 'What the fuck? None of you guys were there!' We would have to explain it's a different band with the same name. When I say a lot, I'm talking over a thousand e-mails. Then they put out a record using the name L.A. GUNS, [and] the e-mails just escalated. That was the point where some from our family stepped who had unlimited funds, which we used to stop this. It was what we needed to do, and it is done. Can you imagine, now they have to make up their legal fees? In what reality is it worth it? For Steve Riley to spend $80,000, and they will never make that back with RILEY'S L.A. GUNS. There is no logic, and it's so bizarre."