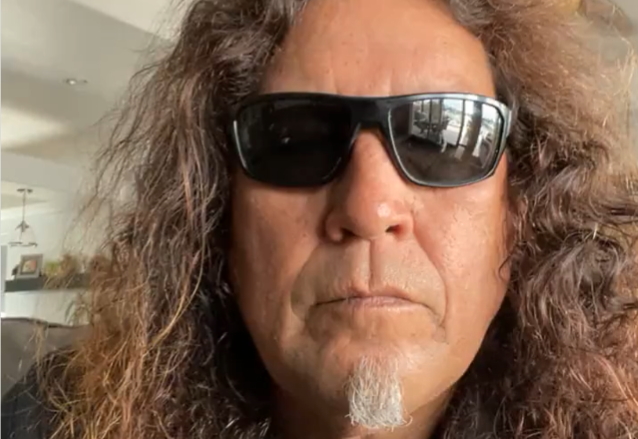 TESTAMENT's CHUCK BILLY Is 'Slowly Working' On His Debut Solo Album: 'I Just Want It To Be Raw And Real'

In a new interview with the 107.7 The Bone radio station, TESTAMENT singer Chuck Billy spoke about the progress of the songwriting sessions for his upcoming first-ever solo album. He said (as transcribed by BLABBERMOUTH.NET): "I've actually talked to over a dozen guitar players that have songs for me that they're writing and creating. But TESTAMENT takes priority first. Once I have time — it's not a big priority; it's just something I'd love to do. 'Cause I've only wrote music with Eric [Peterson, TESTAMENT guitarist] for 35-plus years, and I wanna write something and do something that's not TESTAMENT, that's totally different. I want it to be old-school-sounding, [with] dry drums, no samples, no triggers, like the old vinyls we used to have when we were younger. I just want it to be raw and real, one-take kind of stuff. So that's in the books. And I'm slowly working on that. But that'll be down the line."

Billy previously talked about his upcoming solo LP this past April in an interview with Shawn Ratches of Laughingmonkeymusic. At the time he said: "I recruited guitar players and I told guitar players that I've recruited, 'Just write me a song. But don't write a TESTAMENT song and a thrash song. I wanna write something different than that. Write me something either bluesy, real heavy, more rock. I grew up in an era of loving THIN LIZZY and UFO and bands like that, so write some cool THIN LIZZY-style riffs.' But I really wanted it to be a record where it really took it back, kept it simple, kept it dry — no sampled drums and triggered kicks. Just make it rock, like the old records you used to be — just clean, that you can crank up and they sound good. I want it to be where someone puts it on and goes, 'Oh, that's Chuck?' Kind of listening to it. That's kind of what I'm looking for."

Elaborating on how different his vocal approach might be on his solo album compared to the music he has written and recorded with TESTAMENT, Chuck said: "Speed metal and thrash metal is based on a lot of cadence — it's the timing and the beat of the song — so I've learned how to sing in cadence, really, where other rock songs [have] more melody or maybe there's more note changing in the guitar playing where I can carry different melodies and things like that. I guess I'm looking for a challenge and something that I'll actually be proud of."

Billy went on to say that his debut solo album will "definitely happen. I just thought maybe during COVID [I would have more time to work on it… But you just get busy in life, and I just didn't focus on it," he explained. "But I do have a lot of people reaching out to me going, 'I'd like to contribute a song.' It's, like, 'Write it and just send it to me. And we'll take it from there.'"

In March, Billy told the "Let There Be Talk" podcast that he had spoken to such guitar players as Gary Holt (EXODUS, SLAYER),Mark Morton (LAMB OF GOD) and Joe Bonamassa about collaborating with him on his solo album.

Billy originally discussed his plans for a solo album during a summer 2021 appearance on the "Not These Two Fucking Guys" podcast. At the time, he said: "Well, it started [to be] in the works, but then things just kind of got held up. I was recruiting some guitar players over the last six months to write a record with me, and I was gonna use a different guitar player on every song to help me write songs. Mark Morton, I've talked to him; he wants to work [with me]. I also want Gary Holt to write some songs with me. Glen Drover [ex-MEGADETH] is gonna write some songs… I haven't approached my cousin Stef [Stephen Carpenter] from the DEFTONES yet, but I'm gonna see if he'll wanna write a song with me. I tried to reach out to Joe Bonamassa [to see if he wants to] write a song with me."

As for the musical direction of his solo LP, Billy said: "I want it to be different. And what I've told all these guys [is] that I wanna do a solo record, but I don't want it to resemble TESTAMENT; I wanna do something different. And the direction I wanna go is the old classic vinyl-sounding records — just real, clean and dry and big. Real tones — not compressed digital stuff. I want it to be classic sounding, but have it rock, have it bluesy. Have some metal, but just have it where [it doesn't sound like what people are used to hearing from me]."

He continued: "I've done these compilation records for this Cleopatra label, and I've done anything from Michael Jackson to Christmas songs. And every time people hear it, they go, 'Man, that's kind of cool.' And I was thinking about it — it's fun to do, and it's challenging and different. So when I think of a solo record, I want it to be different — I want every song to kind of have its own personality and stand on their own. So that was kind of my goal. If I do a solo record — maybe I'll do a few, but if I do one solo record, I want it to really be something that [is] challenging to me, different for me and different from [people's] expectations, when somebody puts it on, [but] that they'll enjoy it still.

"So that's what I wanted to do," Chuck added. "So I've been telling [the various guitar players], 'Just start writing. Put the song together for me. But don't think metal. Don't think TESTAMENT. Don't think the bands you're in. Just write something cool that's got a vibe. And give it to me. Let me do my thing on it.'"