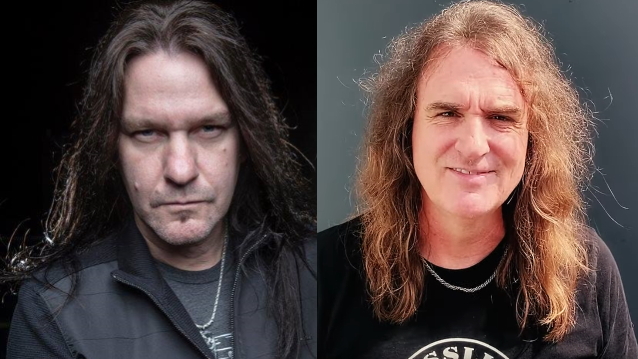 In a brand new interview with Waste Some Time With Jason Green, former MEGADETH drummer Shawn Drover was asked for his take on the recent sex scandal that resulted in the band's longtime bassist David Ellefson being removed from the group. He said (as transcribed by BLABBERMOUTH.NET): "I really don't know any more about it than you do, or what has been displayed in the press or online and stuff. There's a lot of speculation about certain aspects of it. We know some stuff is factual, with what happened.

"These things have happened on the road with musicians in the past — back in the '60s and the '70s, way before there was videos on your iPad and all the technologically advanced things that we have now," he continued. "So it's hard for me to really give any kind of comment or speculation other than what we know is factual is factual… It's really hard for me to really comment on any of it, and why he got fired or did not get fired from MEGADETH — he subsequently did get fired for reasons that probably only Dave [Mustaine, MEGADETH leader] and maybe David know. I just don't know any more than you do about it.

"It's unfortunate," Shawn added. "I really don't know what else to say. I never wish any bad will on anybody. I've known David for years. He was always a great guy, and I never had any problem with him. That was obviously long after I left the band, so whatever transpired, it's hard for me to really comment on it, to be honest with you."

Drover went on to suggest that the entire episode has been amplified by a 24/7 news cycle and the content- and engagement-hungry social media landscape.

"With the way things are now, anybody can video something, of anything happening, and if it's scandalous, it's on CNN or it's on this web site or it's on whatever. It could be anything — not just music," he said. "If an actor gets caught somewhere punching somebody out, now it's this big thing, where if this happened in the '70s or '80s, an actor getting in a fight with somebody, so what? So, we live in different times.

"Again, all I can really say is it's unfortunate, and I wish them all well. Despite what happened, we're all in the MEGADETH family, and I wish everybody well."

Five months ago, Ellefson was fired from MEGADETH after sexually explicit photos and video of the bassist leaked online along with allegations that he had been grooming a fan, which he vehemently denied. A short time after after the messages and video footage involving him were posted on Twitter, Ellefson filed a report with the police department in Scottsdale, Arizona alleging unlawful distribution of sexually explicit images of him by unknown offenders. In the report, Ellefson admitted that he had been exchanging sexual text messages with a Dutch teenager, who captured a video of several of their virtual "masturbating encounters" without his consent and shared them with friends. (According to Ellefson, the woman was 19 at the time of their first virtual sexual encounter.) Ellefson, who lives in Scottsdale, first became aware of the video on May 9, when the claim "David Ellefson of MEGADETH is a pedophile" appeared on Instagram. Ellefson told police he was notified on May 14 by MEGADETH that the band would be parting ways with him. Three days later, he was dismissed from the group.

Drover announced his exit from MEGADETH in November 2014 to "to pursue [his] own musical interests."