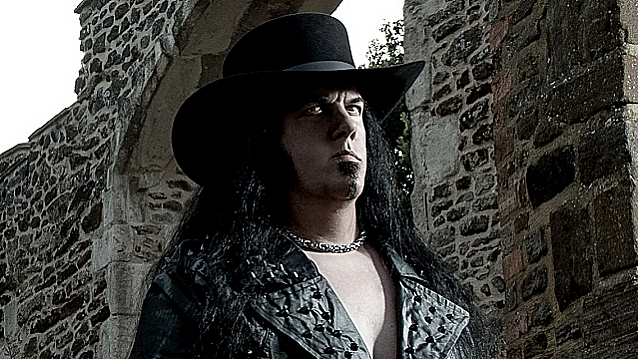 Ex-MORBID ANGEL Frontman DAVID VINCENT: 'I Would Argue That JOHNNY CASH Was Death Metal; He Just Didn't Know It'

Former MORBID ANGEL and current VLTIMAS vocalist David Vincent recently spoke with Metal Underground. The full conversation can be streamed below. A few excerpts follow (as transcribed by BLABBERMOUTH.NET).

On recording the debut VLTIMAS album together as a band:

David: "We put a lot of work into that record. We pulled out all the stops, and everybody worked very, very hard... There's no replacement for the kind of magic that you get sitting in a room with people. The sharing of ideas... It's very organic. We just banged it out and banged it out — 'Oh, that sounds great.' We just kept it in a circle, kept working and working. We're all very, very pleased with the outcome. It took a long time to get there. We had it recorded, and because we were only worried about the music, then all of a sudden, 'Oh, gee — we need artwork. We need an album cover. We need a photo shoot' — all these things that we didn't think about at all because we were only thinking about the music. That mistake won't happen again, but we were just so excited about the sound that everything else became out of sight, out of mind... We had a lot of fun making the record, even though there were some challenges that I had personally at the time, but we got it done."

On whether he'd change anything about the album if given the opportunity:

David: "When I listen to it — I don't listen to the record a lot, but we did listen to it when we arrived [for our European tour]. We rehearsed in The Netherlands because our bassist lives there, and we were done with rehearsal one day and he put the CD on. I hadn't listened to it for months, and I listened, and I'm like, 'God damn — this song's good.' He goes, 'Fucking yeah'... The good thing about it is that it's done. I think there's always something that somebody would go back and say, 'I might have been able to do this a little better,' but at some point, you have to be done. I've read another artist say this — you're never really done with your record. You give up. You could spend months on new shit, and that's not going to get it done. You have to be disciplined, get in and work every day, do the best you can and hopefully the result is something that everybody can feel proud of. I think that's where we're at."

David: "This really is a priority for all of us. We already had our first writing session for the next record. It's still in its infancy. I can't say, 'It's almost done' — it's not; it's nowhere near — but I want to say we're further along on the first writing session of our second record than we were on the first writing session of our first record. We all pretty much know how each other thinks now, and it's easier to think in unison than at first when you're still exploring those things. It sounds like us. I'm not going to say it's a drastic change, but it grows. It's going to be bigger. We didn't pigeonhole ourselves on the first record. Because there's so much diversity, it lends itself to continuing with that as opposed to trying to get one very narrow sound. None of us like that."

On celebrating MORBID ANGEL's history with I AM MORBID:

David: "I spent over 30 years of my life on something, and it's very important to me. Apparently it's important to other people too, because our booking agent keeps getting calls. It's nice. It's a nice portfolio of music that has a fair amount of diversity in it, and it lets me wake up in the morning and be me another day."

On whether VLTIMAS and I AM MORBID will ever share the stage:

David: "I'd have to have people carrying all kinds of stuff. I think that'd be a little much. Maybe for a one-off, but not for a tour. That wouldn't work."

On the status of his outlaw country solo career:

David: "I have a lot of material. I just need to find the time to record it. It's a priority, but it's not a priority. Compared to VLTIMAS, it's not a priority — but it is. I have these songs and I want to do it; it's just between touring and writing, I have so much going on, and I still have to build in time to relax and spend time with my wife."

On the kinship between outlaw country and heavy metal:

David: "I would argue that Johnny Cash was death metal. He just didn't know it. He lived it. So did George Jones, David Allan Coe, Waylon Jennings... There's a big difference between Nashville pop music and real, heartfelt country."

On his forthcoming autobiography:

David: "That's another thing I've been working on for many years now. I'm ready for it to come out. It just took a while to get it right, and then it took a while to get the right publisher and set everything up and get the schedules. Everything takes time. Collecting and searching through the archives and family photos and finding old things — personal stuff. Some of it, I'd never seen before, but I somehow found it."

VLTIMAS – in which Vincent is joined by Rune "Blasphemer" Eriksen (ex-MAYHEM, AURA NOIR) and Flo Mounier (CRYPTOPSY) — released its debut album, "Something Wicked Marches In", on March 29 via Season Of Mist.