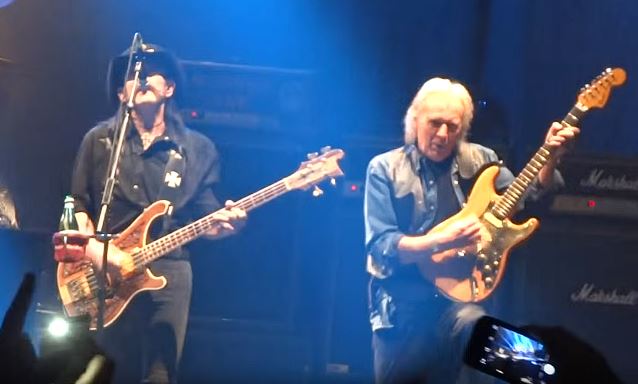 Lemmy found out on December 26 that he was suffering from "an extremely aggressive" form of cancer. The 70-year-old rock icon died two days later at home in Los Angeles with his family by his side.

Clarke was a member of MOTÖRHEAD from 1976 until 1982. He was one-third of the band's classic lineup, which also included drummer Philthy "Animal" Taylor, who died last month of liver failure.

Clarke says: "I have just been told that Lemmy has passed away in L.A. Like Phil, he was like a brother to me. I am devastated.

"We did so much together, the three of us. The world seems a really empty place right now. I am having trouble finding the words... He will live on in our hearts. RIP Lemmy!"

Last year, Clarke spoke about the disappointment he felt after he was fired from MOTÖRHEAD. He said: "Some things you just don't get over. I had imagined dying onstage with MOTÖRHEAD, so it was a blow when they didn't want me any longer."

In a 2011 interview, Lemmy talked about the circumstances that led to Clarke's final departure from MOTÖRHEAD. He said: "I like Phil; he was my best mate. Eddie was kind of a friend except he was always complaining about something. It got kinda tedious. Last time he left, we laid low. Before, one of us would go off and bring him back. It was a shame. He shouldn't have done that; we had a lot going for us back then. He should have stuck though it. It was the Wendy O. Williams thing and I couldn't understand that (reference: recording 'Stand By Your Man', a cover version of the Tammy Wynette with Wendy O. Williams). He just gave up on it, because Wendy wasn't immediately perfect on it, she just needed to go through it a few times and he left the band over it. I couldn't fucking believe it. I think he was expecting to be talked back in. Phil came in the room and said, 'Eddie's left again.' I said, 'Whose turn is it to go talk to him?' [Laughs] I said, 'Fuck it, I'm not doing it.' That's the way it went. Wrong decision on his part."