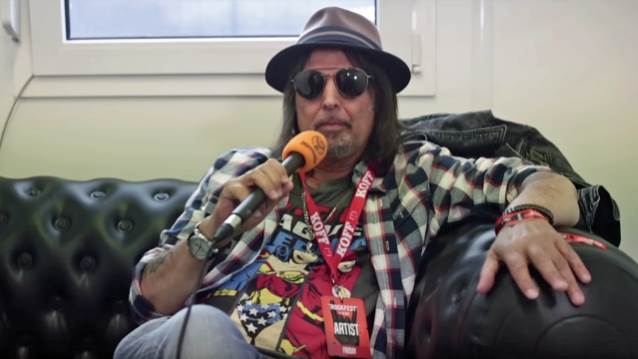 Former MOTÖRHEAD guitarist Phil Campbell spoke with Kaaos TV prior to PHIL CAMPBELL & THE BASTARD SONS' June 8 performance at Rockfest in Hyvinkää, Finland. The full conversation can be seen below. A few excerpts follow (as transcribed by BLABBERMOUTH.NET).

On the response to THE BASTARD SONS' debut album:

Phil: "Lots of positive feedback. I don't think we've had any negative feedback, all over the world. It's a strong album, I think. We're all really proud of it still — we're not fed up with it yet. It's a really good debut album, and we'd have to work really hard, I think, to make a better one for the next one. It's been great."

On the status of his autobiography and solo album:

Phil: "I've decided to put the book on hold. I want to do music first. I'm still working on my solo record. It should be out next year, at last, after about twenty years. We have already started writing some ideas for the next BASTARD SONS album, so probably that could come out as well maybe next year, hopefully."

On whether touring with family members leads to an increase in arguments:

Phil: "That's why we don't do long tours. It's mostly good, but we have disagreements like any other band. The family thing doesn't really come into it that much. We're all pretty close, and Neil [Starr], our vocalist, we've known him for a long time. You just treat everyone like you would anyone else, really. But I always get the last word."

On MOTÖRHEAD's enduring popularity in Germany:

Phil: "A rock fan is a rock fan worldwide. With MOTÖRHEAD, Germany was always a really strong market for us. We sold more records and more tickets there than any place, really. It's just a pleasure to keep going and playing there. We get offered lots of gigs there, and if they sell out, of course we're going to play there. But a good gig is a good gig anywhere in the world, really."

Phil: "I think a lot of the establishment, quite often, they look down at rock music. It's not on the top of their list, because everyone doesn't go around dressed smartly. But it sells more tickets than another other music form, I should imagine. They're happy to take their tax off the rock fans, but maybe they should be giving more back."

PHIL CAMPBELL AND THE BASTARD SONS (formerly PHIL CAMPBELL'S ALL STARR BAND) features Campbell playing alongside his sons Todd, Dane and Tyla, plus vocalist Neil Starr. The group's debut album, "The Age Of Absurdity", was released on January 26 via Nuclear Blast.