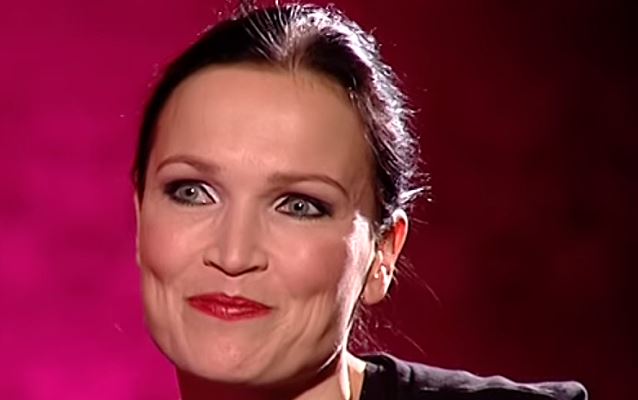 Romania's "Transilvania Culturala" recently conducted an interview with former NIGHTWISH singer Tarja Turunen. You can now watch the chat below. A couple of excerpts follow (transcribed by BLABBERMOUTH.NET).

On the beginnings of her musical journey:

Tarja: "Since I was a little child, I always wanted to do music. That was my passion. I was kind of, I would say, even obsessed with music. I wanted to start learning piano when I was six years old, and after that, my parents were very supportive and they took me to several kinds of music lessons. So music filled all my childhood. Actually, also the teenage years and growing up as a woman, so I've been studying ever since I was six — classical music."

On the transition from classical music to rock and vice versa:

Tarja: "For me, it was a huge challenge — still it is a huge challenge to sing rock, because I never thought of becoming one of the most followed female singers in rock genre; I never, never, never thought about that. But I took the challenge, because I love the music, and it's all about that. For me, there are no borders in music in general. When I'm doing something, I do it with my heart. And so if I feel good about something, I'm going for it; one hundred percent I'm on it. And so that's been my passion in that sense, in music — to feel free. But the transition took time. It took years to really feel comfortable with the voice during the rock performances and running on the stage. I wanted to do my best. I really worked very hard, but I had no teacher to teach me to sing rock. I kept on taking lyrical singing lessons, and that's what really made me stronger also in rock singing."

On how she finds new challenges in music and whether it's important to be always a step ahead:

Tarja: "Yeah, in that sense, for me, because I'm an artist now, I am having a career, and it's a very versatile career; I'm having a lot of diferent kinds of projects going on at the same time. So I'm kind of a workaholic [laughs], if you can call me a workaholic in that sense, because I'm always doing something. I cannot be just doing nothing. I love working, I love music, I love the freedom that I have today as an artist. So, in that sense, you can say that, yeah, okay, I want to be a step ahead. [Laughs]"

On what inspires her when she creates music:

Tarja: "Oh, many things. In general, my life inspires me — the journeys I take with music or with my family or what I see around. You know, things that are surprising me, or things that are bothering me. Positive and negative things of life in general. Books of Paulo Coelho; I'm still reading his books. Music-wise, I listen to a lot of variety kind of music. I listen to soundtracks and I listen to rock and even metal. I listen to pop in general. I love bands like MUSE and stuff like that. I always keep my mind very open when it comes to music."

Dutch singer Floor Jansen made her live debut as the frontwoman of NIGHTWISH in October 2012 at Showbox Sodo in Seattle, Washington following the abrupt departure of the band's lead singer of five years, Anette Olzon.