Ex-NIGHTWISH singer Anette Olzon has slammed her former bandmates, claiming that she had "no say" during her time with the band and insisting she was fired from the group shortly after announcing that she was pregnant with her third child.

Olzon, who will release her debut solo album, "Shine", in February, gave an extensive interview to Finland's largest women's weekly magazine, Me Naiset, in which she spoke about the circumstances that led to her split with NIGHTWISH. A few excerpts from the chat follow below (translated from Finnish).

On how her experience may be similar to what former NIGHTWISH singer Tarja Turunen went through years earlier:

"It would be interesting to [speak] with Tarja and talk about our experiences [while we were members of the band]."

On splitting with NIGHTWISH after coming down with a stomach flu and becoming hospitalized in September 2012 during the band's North American tour:

"No one from the band visited me while I was in the hospital."

"I suggested we cancel shows until I was well enough to return to the road but the boys didn't want to even consider that. [Former AFTER FOREVER and current REVAMP singer] Floor Jansen had replaced me before I had recovered."

On the emotions she went through — first shock, then anger and sorrow — after her departure from NIGHTWISH, which she compared to a divorce:

"I wondered what I had done wrong to deserve this. I was also, of course, worried that I wouldn't be able to support my family."

On how her marriage to her now-ex-husband suffered as a result of the pressure she felt during NIGHTWISH's heavy touring schedule after she joined the band:

"[Travelling between shows] in Brazil and Argentina was scary. People were pulling my cheeks, grabbing and pulling my hair. It was causing so much anxiety that I had panic attacks."

"I was stressed out over my personal life while we were on tour, but I didn't want to take it out on the band. I believe the boys saw I was falling apart, but I didn't get much support from them."

"Emotionally, the toughest part was that the boys decided everything for me. I had no say. If Tuomas [Holopainen, NIGHTWISH keyboardist/mainman] decided that we would go to Africa, off we went."

On how the finances in NIGHTWISH were split (Anette claims the four men in NIGHTWISH controlled millions of euros in revenue through their company Scene Nation, which she wanted to be an employee of, but she had to start her own company, Momma Anka AB, instead. She also claims her company had a loss of 72,800 euros in 2010. During the same period, Scene Nation had a profit of 351,000 euros):

"The concert salaries and royalties were divided evenly, but other income went directly to the men.

"Running a company alone was expensive. I had to borrow money from the boys to start it up."

On not being bitter about how things ended with NIGHTWISH and unresolved feelings she has from the split with the band:

"I've often thought about calling Tuomas to get some closure.

On leading a normal family life in Helsingborg, Sweden and readying her first solo album:

"Only now I can say I am happy.

"Bad experiences have a meaning too.

"I am no longer that overly self-conscious girl who tries to please others and pretend that everything is always right."

In response to Olzon's Me Naiset interview, the members of NIGHTWISH released a statement (translated from Finnish) via their official web site in which they disputed many of the claims made by their former singer, insisting that the article was "full of twisted truths and defamation."

"Welcome to the laundry room...

"The interview of our former vocalist Anette in Me Naiset magazine is full of twisted truths and defamation. This 'one woman vs. the Neanderthals' scenario is an easy to way to take advantage of our media history.

"The split with Anette wasn't because of pregnancy or illness. We discovered her personality didn't fit this work community, and was even detrimental to it.

"These claims we can invalidate right away:

"Claim: Moments [before being fired], Anette had told Tuomas Holopainen of her pregnancy

"Truth: Anette told of her pregnancy to the whole band already a week earlier in Montreal. Everyone was congratulative, and Anette herself offered an option of hiring a replacement vocalist if she can't manage everything, which was already agreed on. Later she took back her decision, and the difficulties really started. Fear of losing money and position seemed obvious.

"Claim: The boys of the band decided everything for me

"Truth: Neither Tuomas nor any other of the boys of the band can singlehandedly decide where we take off to and when. There have been discussions inside the band and support of people on a personal level. Also Anette. Managers and promoters discuss about possible concerts, record releases, etc., and wishes of all the band members have been taken into account. All these details have been negotiated with Anette and her manager. We have the e-mails.

"To keep the touring life bearable, it's reasonable and right to make things comfortable on a personal level. Based on these discussions, Anette was given liberties from interviews and fan meetings. She and her family got an own tour bus and driver in both Europe and America. The expenses were paid by the organization, not Anette or her company. Others of the band didn't use similar benefits.

"Claim: Other income went directly to the men

"Truth: Anette and her company has been paid a fifth of everything that was done during her time and with her. We have no reason to lie, because this cake has provided enough slices for us all. The finances of the band have always been handled openly, honestly and evenhandedly. The books exist. How individual members spend their share is up to their own responsibility.

"We neither want to nor intend to comment this more now.

"Doing the laundry is tiring. Remember to help your ladies with that occasionally." 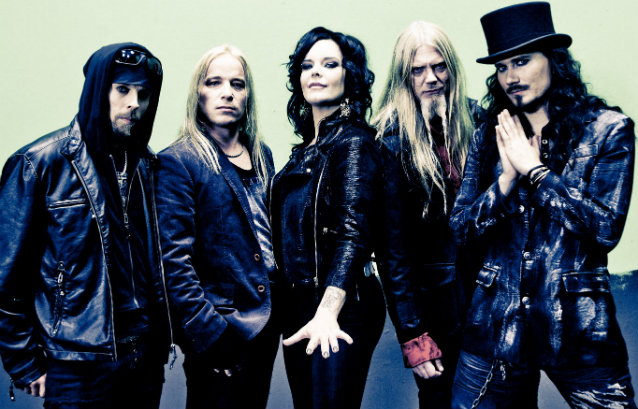