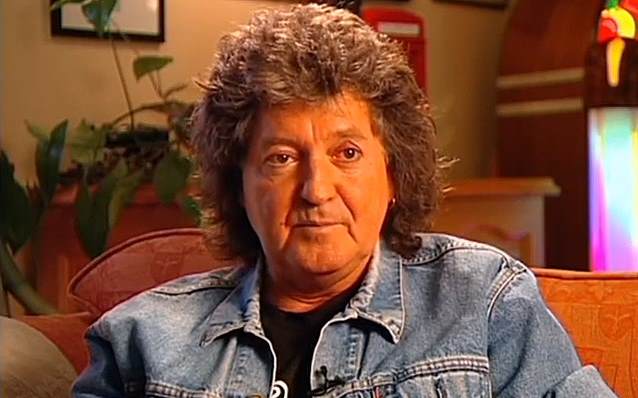 Greg Prato of Songfacts recently conducted an interview with former OZZY OSBOURNE bassist Bob Daisley. A couple of excerpts from the chat follow below.

Songfacts: How was it collaborating with Ozzy?

Bob: Good. It was easy. It flowed well. When the band was first together, it really was just Ozzy and Randy [Rhoads, guitar] and me, because we were writing the stuff and auditioning drummers at the same time — we didn't have Lee [Kerslake]. That went on for a few months and we auditioned about 14 drummers until we found Lee. And we found Lee right before we had to go in to record the first album. Ozzy was fairly easy to work with. He was a bit down at first, because he'd just been fired from BLACK SABBATH and he was depressed and he was unsure of himself. It really damaged his confidence, being fired from BLACK SABBATH. But Randy and I used to encourage him and try to bring him up out of the doldrums. Writing with Ozzy was fairly easy because we had a little songwriting machine going. Randy and I would work on music together just sitting on chairs opposite each other, and then we'd put parts together and then we'd knock it off and Ozzy would sing a melody over it. His melodies were always good. Ozzy's good for melodies. Usually the music came first, Ozzy would sing a melody, and then I would take a tape away into my room and write lyrics by myself to Ozzy's phrasing and melodies that would fit with what he was comfortable with. He wasn't a lyricist and neither was Randy, so I had to wear the lyricist hat. But I enjoyed it. I like writing the lyrics. That's how we wrote together.

Bob: Well, Randy had the basic riff, the signature riff. Then we worked on music together. He needed something to solo on so I came up with a chord pattern and the section for him to solo over. Before it was called "Crazy Train", before we even had a title, Randy and I were working on the music. He had his effects pedals, and coming through his amp was a weird kind of chugging sound. It was a phase-y kind of psychedelic effect, this chugging sound that was coming through his amp from his effects pedal. Randy was into trains — he used to collect model trains and so did I. I've always been a train buff and so was Randy. So I said, "Randy, that sounds like a train. But it sounds nuts." And I said, "A crazy train." Well, that's when the title first was born. And then Ozzy was singing melodies and he was phrasing exactly how it ended up. And I started writing lyrics to it. When we demoed that song in the demo studio in Birmingham, before we'd done the album, before we had Lee Kerslake, we had another drummer with us named Dixie Lee. Dixie Lee was on the demos. We demoed four songs for the record company, Jet Records, so that they could hear what we were doing and what material we were going to be writing. The demo was "Crazy Train", "I Don't Know", "You Looking at Me, Looking at You" and "Goodbye To Romance". We didn't have the last verse in "Crazy Train" written at that stage, so Ozzy just sang whatever it was he sang, so that demo version has a different last verse. But I wrote the last verse for "Crazy Train" when we were at Ridge Farm recording. So that's how all that came about. I've still got the lyrics sheet that I wrote the lyrics on.

Songfacts: Since there's not that much material of Randy that's been released, I'm surprised they never issued those demos as part of a boxed set or something.

Bob: Well, a couple of years ago when they planned to release the boxed set for the 30th anniversary, I went to Sharon's [Osbourne] accountant who handles all her affairs and handles the publishing company and all that. I said, "Well, I've got these demos and I've got tapes of this recording, outtakes, I've got rehearsal takes, I've got us just chatting, clowning about, songwriting tapes," I said, "I've got loads of stuff, I've got hours of it. Why don't you include that on the boxed set?" And I said, "Well, I'm not just giving it away, I'm the only one that's got this stuff. So I want a royalty on it." She wouldn't do it. She just wanted to buy it off me for a pittance and I said no. I'm not doing that again. I've been screwed enough.

Songfacts: I don't blame you.

Bob: The fans suffered. Everybody wants to hear that stuff and I was willing to put it out there. But I said, I'm not just giving it to her. Because also what I have to be careful of is if they control it, they can edit it to make it sound like that same old fairytale that they come up with about how Ozzy and Randy wrote everything, which is total bollocks.