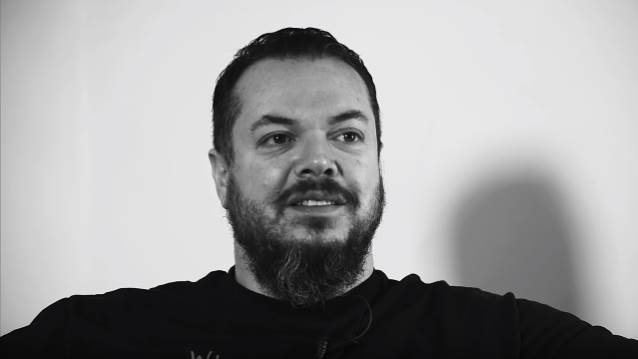 Ex-SEPULTURA Drummer IGOR CAVALERA: 'When Everyone Was Going Faster, I Was Slowing Things Down With 'Chaos A.D.'

Drumtalk, the video podcast by German drummer and videographer Philipp Koch, conducted an interview with former SEPULTURA and current CAVALERA CONSPIRACY drummer Igor Cavalera prior to CAVALERA CONSPIRACY's December 8, 2017 concert at Turbinenhalle, Oberhausen, Germany. You can now watch the entire chat below. A few excerpts follow (transcribed by BLABBERMOUTH.NET).

On when the tribal and percussive elements started making their way into SEPULTURA's sound:

Igor: "To get where we were at the 'Roots' time, it actually started on 'Arise' by experimenting very little on some intros where we wanted to have some weird kind of like 'jungle noises' and things like that. And, once we saw some of that could be mixed with more of like a harder, metal, hardcore, whatever sound, on 'Chaos A.D.', we did a little more experimenting and I actually started to incorporate more of the tribal beats using more toms and things like that. Then we did one acoustic jam during 'Chaos A.D.'. After that, we were prepared to do 'Roots' and that's where I think we just dove straight into the whole thing. For me as a drummer, I have to say, I felt a lot more comfortable playing stuff like I did on 'Roots' or even on 'Chaos A.D.', then maybe on 'Beneath The Remains' when I was trying super-hard to be this thrash drummer. When I started playing the drums, I started playing Samba and Brazilian rhythms. For me, it was a lot easier to incorporate and by doing that, I somehow created my own sound, my own style of mixing those things. I have to say, in the beginning, it was a lot harder because I was, like, 'I have to do the double-bass super-fast' or whatever band I wanted to emulate and things like that. Later, when I was doing stuff that was more tribal and I was, like, 'Wow, that's my thing. I don't need to emulate anyone.' It was just throwing my crazy ideas into the drums. It was cool because somehow, very early on 'Roots', it became almost like a concept record. Every song had an experimental direction to it. The more we did it, it became, I don't know, for me as a musician, it was probably the most incredible thing that I did which was recorded with the tribe. Going to record with the Xavantes tribe, which is a tribe that has no drums. That was something that was very interesting. All they do is voices and some percussion where they put some stuff on their body so when they shake, there's a bit of it, then stomping on the ground. There's no drums. I brought a few percussion instruments there, so I was very free to do some drumming. For me, that was one of the highlights of my career, to go to Brazil and make music with them."

On him refraining from playing blast beats:

Igor: "I don't know; it never really worked with what we are doing. I love blast-beats. A lot of the stuff you mentioned — I remember the first time I saw Mick Harris playing in NAPALM DEATH with us. He was doing the blast beat like a beast. It wasn't the typical drummer. Now I see a lot, especially in black metal, a lot of blast-beats, but they're so light and so fast, but, at that time, Mick Harris, he was doing the same intention and same aggression as the d-beat [down-beat]. For me, that was mind-blowing, but somehow, I never really incorporated a lot of blast-beats into what I did. Honestly, to be fair, when everyone was going faster, I was going on the counter, I was slowing things down with 'Chaos A.D.' and later on, it was keeping more groove and heavy. I don't know…I never got to that point, but I do love blast beats."

On the way drums were recorded during the early part of his career:

Igor: "It's crazy because you have to adapt your drums to whatever is your band. That's the thing. I remember growing up, I was like 'Everyone wants to play louder and louder and heavier and heavier.' No one was giving space to anyone. I was playing as hard as I could. The guitar player would be cranking, my brother, the bass, everything was like a wall. Then, later on, you start sensing that certain things don't really work. For example, I reduced the size of my kicks [drums] to 20s because I felt that would cut more through that wall of sound than a 22 or 24 big-kick for the stuff that I was doing, at least. I still, to this day, I love the 20-inch kick drum. I love the power to it. It has the exact punch that I like on my drums. That's little lessons over time and like you're saying, through the '80s all the way to the '90s, it was a hard thing to work your kick drum with all those crazy sub-frequencies going on with distortion and bass and things like that to the point it became a little ridiculous where now, a lot of the stuff is just the click. There's no bottom end to it. A lot of people who are just listening [makes clicking sound] to just the kick drum rather than the kick. I think a combination of those two elements is usually the best. You got to have the attack, but also some body to it."