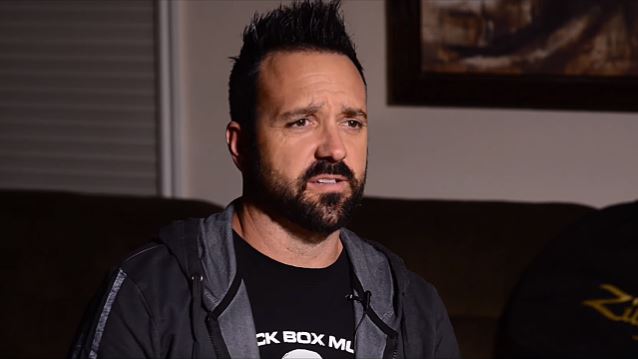 Ex-SLAYER Drummer: I Was The First Guy Saying, 'Yeah, DAVE LOMBARDO Should Be Back In The Band'

Acclaimed metal drummer Jon Dette (TESTAMENT, SLAYER, ANTHRAX, ICED EARTH) recently spoke to the WSOU 89.5 radio station about being asked to play with SLAYER on Australia's Soundwave festival dates in early 2013 after Dave Lombardo was effectively fired from the band over a contract dispute. Speaking about the fan reaction to his performance — which saw him pulling double duty with SLAYER and ANTHRAX — he said: 'As far as the fans go, you're never gonna please the fans that… I mean, they're just gonna be 'Lombardo or die.' And as a SLAYER fan first, I get that. Dave is an integral part of the band, he has been an integral part of the band, and I was very vocal about that in my interviews back then, saying, 'God, I hope they work this out, because it would be really unfortunate if they parted ways again.' I was the first guy saying, 'Yeah, Dave should be back in the band' — but under the right circumstances. It's just my opinion."

He continued: "But, yeah, you're gonna hear flak. Oh, I dropped a drumstick, and somebody's gonna go, 'Ooh, he messed up.' It's, like, yeah, that's right. I did. [Laughs] Yeah, so what? So I drop a stick, I pick up another one. It happens. I'm not a robot. I'm a guy that got to play SLAYER songs for [only] three days [in rehearsals] and then get on stage and [play in front of thousands of people]."

Dette added: "I think the result was amazing down there, considering [the circumstances]. Overall, it felt really great and it was a great experience."

Dette previously told SF Media about playing the material that was originally recorded and performed by Lombardo and ANTHRAX's Charlie Benante: "Well, I've been a fan of them since I started playing drums, so I have a foundation of their style. To fill both Charlie and Dave's shoes feels natural for me. Also, I play in a similar style so everyone is comfortable. We've rehearsed cues for live. Before the first show I did with SLAYER, I'd rehearsed for three days with Kerry [King, SLAYER guitarist], so the first show we did on stage was the first time with Tom [Araya, SLAYER bassist/vocalist] in sixteen years. No rehearsal or soundcheck, but Tom said it felt like we'd been jamming for years. If I make them feel comfortable and play the songs where both the band and fans think it doesn't feel like a first show, then I feel I have done my job."

Dette originally joined SLAYER in 1996 when Paul Bostaph left to work on his side project, THE TRUTH ABOUT SEAFOOD. Dette performed with SLAYER at the 1996 Ozzfest to promote the band's covers album, "Undisputed Attitude".

For the past couple of years, Dette has been playing sporadic shows with ANTHRAX as a temporary replacement for Benante, who was undergoing physical therapy in his continuing battle with carpal tunnel syndrome.

Dette is currently promoting the debut album from MESHIAAK in which he is joined by TERAMAZE guitarist Dean Wells, former 4ARM frontman Danny Tomb and bassist Nick Walker.

"Alliance Of Thieves" came out on August 19 via Mascot. The CD was recorded at GREEN DAY's Jingletown Recording Studios in Oakland, California.