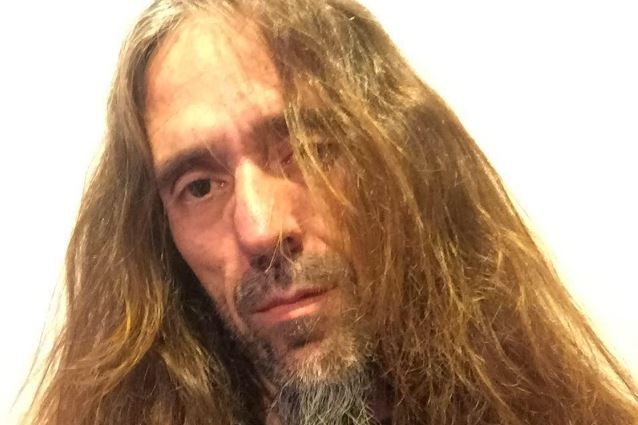 San Francisco Bay Area thrashers TESTAMENT are working on a DVD to commemorate the 30th anniversary of the band's classic debut album, 1987's "The Legacy".

The DVD, which is slated to come out next year, will contain interviews with many of the people that were, and continued to be, involved with TESTAMENT's career, including former TESTAMENT bassist Greg Christian.

Prior to being interviewed for the DVD, Christian — whose acrimonious January 2014 exit from TESTAMENT was well publicized on these pages — expressed hope that he could remain positive while reminiscing about the making of the band's first LP. He explained on his personal Facebook page in a post which he made public: "'The Legacy' was my first album. It was and always will be a huge thing to me. I am a part of that record and that record is a part of me. I don't wish to tarnish or degrade the memory, energy or essence of it. We created, started and built something special.

"I was 20 years old when 'The Legacy' was recorded at Pyramid Sound, Ithaca, New York with [producer] Alex Perialas and 21 when it was released... I am now almost halfway through my 50th year of life and over the years have done eight full studio albums (don't even know how many live releases or 'best of's) over a dozen music videos, and I have no idea how many live performances (easily 2,000+ in all) — all in the name of 'this thing' we started way back then.

"That's a big life investment. Right? A lot of time and life went into building 'this thing.'"

He continued: "Anyway… I'm going to do my best to not tarnish the luster of this creation (that so much of me went onto) any more. Two wrongs don't make a right. Just makes something else wrong too. That's how so many things all over the world got so fucked up in the first place. By people using the tactic of 'fighting' a wrong with another wrong.

"I said a lot of stupid insulting things out of being upset, angry and hurt. That was shitty of me. I regret popping off like that and the grief it's caused. I've since tried to 'restore the shine' to 'this thing' to the best of my ability.

"It pains me to see the creation that was my life for so long not shine like the sun. No matter if I'm still any part of it or not — in me — I want it to evoke a sense of pride, dignity, happiness, accomplishment, etc., not anything negative. But me attempting damage control for the stupid shit I spewed out can only do so much. Reality is, the reason I was upset, angry and hurt is real. And to truly restore the shine to 'like the sun,' the original wrong needs to be addressed and some realistic effort has to be made to correct the imbalance — that's the only way to truly purge the malignant toxins from the energy and entity. And clean out the stains.

"At 50 years old, I invested in and worked for a life. But I haven't lived it. Not yet.

"I was obviously part of something. And if you scroll down my [Facebook] page to any of the video clips of me playing the bass — I obviously brought something to the table and to the stage.

"I should be in a different place in life and it's not only me (my two children, their mothers, my sister and father) that's negatively affected but it's also all the fans out there that have to wait so many years to hear my songs. That imbalance is inseparable from the energy of the entity. That's not something I have any control over. It's just the way it is.

"I love TESTAMENT and want that entity to shine but it's not on me.

"My musical focus is 100% on [my new band] TRINITY FALLEN and I am loving it. I don't think most people get it yet, but they will.

"And Chuck [Billy, TESTAMENT singer] — I really am sorry for the stupid shit I talked and the drama it's caused. Truth is, all I ever wanted to do was play music — but truth also is both you and Eric [Peterson, TESTAMENT guitarist] have been living off my investment along with your own, while I've been starved out. That's polluted the energy of TESTAMENT. It can be fixed, but only by actual corrective action. And at this point — that's on y'all. I wash my hands of any bad feelings and wish y'all the best!!

Shortly after giving his interview for "The Legacy" 30th-anniversary DVD, Christian checked in via his Facebook page to say that "it went well. Saw faces I haven't seen in a lotta lotta years: Rob Lombardo, Derrick Ramirez, Alexis Olson, and some I haven't seen in a few years Zetro [former singer of the pre-TESTAMENT band LEGACY and the current frontman of EXODUS], Louie [Clemente, former TESTAMENT drummer] and Chuck [Billy]. Doing the interview brought back a lot of memories. But here we still are. C'est la vie and whatever..."

Earlier today (Sunday, October 16),Christian once again took to his Facebook to say: "Can't sleep .. thinking about that interview for the 30-year anniversary of 'The Legacy' and I can't help but think: I wasted my fucking life working for and investing my time and energy building something only to be ass out after all these years. At the time when I should be doing OK. It's not like I didn't earn it. And to have one of the two people that've been living off my investment smile and act like they give a shit. Wow.

"I'm over and done with TESTAMENT. That interview was the last energy I'll ever put into that band again.

"I don't hate. I just don't care. Obviously it's mutual. Talk is just hot air and lip service. In the real world, I made a real investment. The only way to make things right is with real money. Until then. I don't care."

He added in the comments section below his post: "Ya know… With as much of my life as I put into this, and as much as I sacrificed for this — to be where I am at this point (and especially the last six years I was in the band — since [2008's] 'The Formation Of Damnation') isn't and wasn't worth it. If I had it to do again — would've done something different with my life. Not that. Not with those people. It wasn't worth it and it was a huge mistake."

He then attempted to clarify: "I have no ill feeling toward them. I'm just over it. And I say I made a mistake or stupid life choice. I appreciate the fans more than anyone can probably understand. Even when it was a miserable situation and I knew it wasn't gonna get better — I still gave my all every show. I love playing on stage and put everything I have into it. But I still think I made a bad life choice here."

Both Billy and Peterson have been vague when discussing Christian's departure from TESTAMENT in past interviews. Eric told Germany's Rock Hard magazine: "Well, you know, I'll just say this… Greg, basically, I think, was basically struggling in his mind with what he was doing. And he just seemed very unhappy on tour, and he has a lot of different reasons; he can only describe that. But he just seemed very unhappy, and we just let him go. Like, 'OK, you're unhappy. Then go.' 'Cause it was a lot of tours where he was unhappy. That's all I can really say about that."

Speaking to 100PercentRock.com, Billy said: "Well, I think Greg, he informed us that he wasn't going to be participating on the new record release and that was his last tour with us… I think that the last tour, he just wasn't getting along, and he just decided that that was going to be the last tour with us, so we just kind of said, 'Well, okay. I guess we'll have to maybe look for what's coming up in the future.' You know — there's nothing we can do."

Did that video interview for The Legacy album's 30 year anniversary. It went well. Saw faces I haven't seen in a lotta...

Can't sleep .. thinking about that interview for the 30 year anniversary of The Legacy and I can't help but think:
I...

I was doing great til yesterday afternoon .. but that's what happens when seriously issues are never resolved. Just...