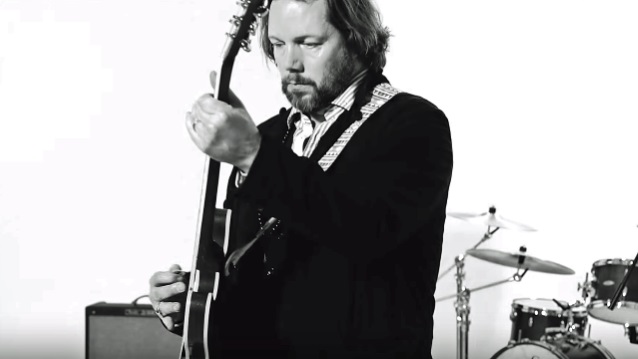 Ex-THE BLACK CROWES guitarist Rich Robinson has responded to recent comments made by his brother and former bandmate, saying that Chris Robinson "has a tendency to run his mouth."

It's been more than four years since THE BLACK CROWES split following an epic show at the Bill Graham Civic Auditorium in San Francisco. In that time, Rich Robinson has kept their music alive in his spinoff group THE MAGPIE SALUTE, but his brother has focused on the CHRIS ROBINSON BROTHERHOOD, a jam band that plays almost nothing from the CROWES catalog. Chris hasn't even sung many of their songs in any capacity since the group folded, but that's going to change this spring when his new band AS THE CROW FLIES kicks off a 17-show tour in Port Chester, New York.

Rich, who hasn't spoken to his brother in five years, was irked by the fact that Chris referred to THE MAGPIE SALUTE as a "BLACK CROWES tribute band." Chris has since announced that AS THE CROW FLIES will also perform THE BLACK CROWES material on tour.

"He has a tendency to run his mouth," Rich told Rolling Stone. "And actions speak louder than words. So now he's in a BLACK CROWES tribute band."

Rich also accused Chris of trying to minimize the guitarist's contributions the band. "Chris wrote the lyrics and I wrote all of the music and arranged the songs," Rich said. "He's kind of hinted that that wasn't the case and him saying I'm in a BLACK CROWES tribute band is him trying to diminish the fact that those are my songs and I'm out there playing my songs with the guys that actually played on those records. That being said, I wish Chris well. Ultimately, I love him. He's incredibly talented and a great singer. I wish him well. I'm really more excited about what I'm doing now and moving forward and making this great record and getting out there just exploring music with the people that I admire and want to play with."

Rich went on to say that the chances of any kind of THE BLACK CROWES reunion are slim to none. "I kind of feel like it's in THE KINKS realm where it's just done," he said. "I'm really happy not to play with [Chris]. I don't think it's healthy for anyone to be around that. If he's truly happy playing CRB [CHRIS ROBINSON BROTHERHOOD] songs and that it's silly to play BLACK CROWES songs until he's ready to do it, then it's great. So be it."

THE MAGPIE SALUTE debuted in January 2017 with four shows in New York, followed by four more in London in April of last year.

THE BLACK CROWES failed to reunite for a discussed 25th-anniversary tour in 2015 after more feuding between Rich and Chris.