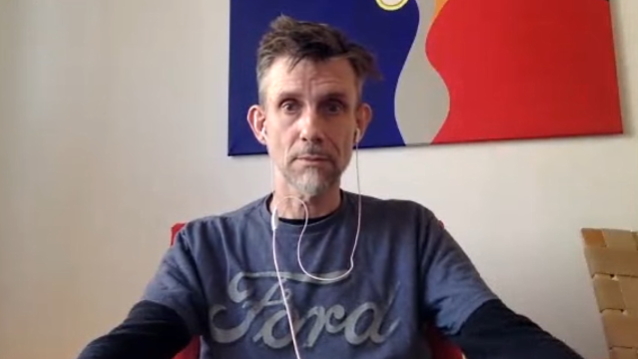 Ex-THE HAUNTED frontman Peter Dolving, who left the band more than a decade ago, says that he has "persistently tried" to make peace with his former bandmates without much success.

The 52-year-old singer, who is currently the CEO of Svenska Verde AB, a Swedish med-tech company specializing in cannabinoid API, reflected on his exit from the group in a brand new interview with Pierre Gutiérrez of Rock Talks.

Asked if he is still in contact with any of the members of THE HAUNTED, Peter said (as transcribed by BLABBERMOUTH.NET): "I will give you a sad and honest straight answer: I have persistently tried, and I even met some of them on the street. I have had a sympathetic few meetings with Per [Möller Jensen, drums] — everything all good, all love. With the other guys, they've done something… They've done nothing; that's a better word for it. They've gone completely dark and silent, and I think it's kind of sad and childish, but everyone has to deal with their emotions around something their way and everyone's perspectives are going to be different.

"I'm very expressive and super sensitive and emotive, and I discuss abstracts on very many levels," he continued. "I've studied philosophy, psychology, psychiatry. I come off as loopy — I know that, and I try to avoid that. But I'm a bit much, I think, for [some people]. And there's nothing wrong with that. We're different. We're just human beings. We really are different."

When Gutiérrez pointed out that Dolvingshared an angry public post on Facebook in August 2012 in which he "insulted" the other members of THE HAUNTED "in different ways," Peter said: "I tried to insult them in four different ways. [Laughs] If I would have been in the same room, I would have kicked them all in the fucking balls so they fell down. You can't do that in a way where you can do it and you kick everyone in the balls at the same time where they fall down at the same time. I did that as a statement to mark that these dudes are assholes. End of story. So what do I mean with 'assholes'? I mean that these dudes do not play straight, and this is my statement about that. They can do anything they want; it's their business. I was also a part of that business, but I was at that point out. I worked to communicate before I left the band and made my statement for over a year. I tried to find a balance in what was going on. It was based in a conflict that started even before I rejoined the band.

Asked why chose to delete his Facebook post within just a few weeks of sharing it, Dolving said: "Because the purpose of it was done. There's no point of it to just be hanging around there and a bunch of people to be misunderstanding what's [contained in it], because people are not gonna understand. It was very, very specifically directed to the business and the people involved. I was making a statement and pointing out that 'this is the reason. Everyone knows the narrow details, but these are the main fundamentals that made me stand for this reason.' Again, with the word 'asshole,' this is my strong emotive reactive negativity, and I really need to let it go.

"We are so different in reactivity to the world around us, and I did not know this and I did not respect this 10 years ago," Peter said. "After 10 years of studying psychiatry and psychology, on top of what I already knew, I can't justify that position. [Laughs] It's a judgmental and a negative kind of position, so it's an angry position, so I can't justify it and I can't hold on to it. And the only thing I can say that it's true that I can move onward, that it's not in the past, is the difference and the meaning and the whole point of why I'm doing what I'm doing now."

In his August 2012 statement explaining his exit from THE HAUNTED, Dolving said that he left the band because he "had fucking had it with dysfunctional bullshit." He went on to say that he "deeply question[ed]" whether the Björler brothers, THE HAUNTED guitarist Anders Björler and bassist Jonas Björler, had "the slightest clue what deep loving friendships, joy and caring is even about. They think in terms of 'me, me, me, me, mine, mine' to the fullest and most complete." He called Anders and Jonas "two of the most fucked up, emotionally dysfunctional pieces of shit I have ever worked with," adding that "one thing they will never ever have again is my respect, my trust or care." He also claimed that there were "drugs involved within the band, and crew members whose alcoholism/drug abuse was just overlooked and ignored because the individuals in question was cheaper than anyone else and delivered the goods."

Previously a vocalist for MARY BEATS JANE, Dolving joined THE HAUNTED in 1997 and sang in their debut self-titled album. In 1998, he left the group to concentrate on a band called ZEN-MONKEY but returned in 2003 following the departure of Marco Aro (the vocalist which took over Dolving's spot after Peter's 1998 exit). He has since appeared on the studio albums "Revolver" (2004),"The Dead Eye" (2006),"Versus" (2008) and "Unseen" (2011).

Dolving's last CD with THE HAUNTED, "Unseen", was released in March 2011 via Century Media Records. The LP was once again recorded with longtime producer Tue Madsen (MOONSPELL, DARK TRANQUILLITY, GOREFEST, SICK OF IT ALL) at his Antfarm Studio in Århus, Denmark.