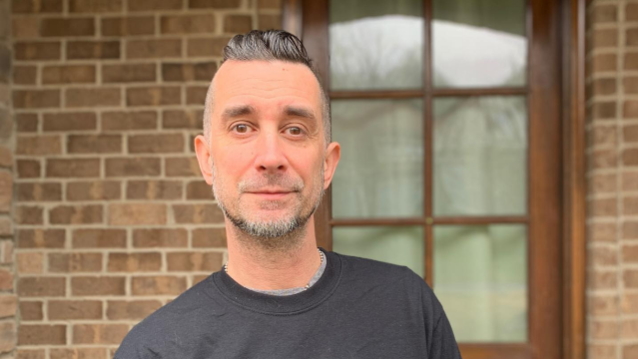 A year ago, longtime THE OFFSPRING drummer Pete Parada announced that was being dropped from the band's tour after refusing the COVID-19 vaccine for medical reasons. He has now taken to his social media to reflect on his decision to not go along with "the mainstream global narrative/response to the virus", calling it "the most harrowing ordeal of my life."

On Tuesday (August 2), Parada wrote: "What a difference a year makes. One year ago today, I made a statement about losing my gig. At the time it felt as if I was losing my entire career and the biggest piece of my identity.

"I spoke up because I needed to try to shape the world in a way that allowed for my children to make choices about what happens to their bodies - free of coercion. But I had fully expected to be cancelled, and that price tag was worth the hope of a shift in our collective consciousness. Then something amazing happened: people started showing up with overwhelming support.

"What I thought would be a flame war for myself and my career turned into a community of others who felt the same way but didn't have an outlet to express it, or didn't feel capable of speaking up," he continued.

"I can't count the number of messages I received from all over the world – people who felt lost and devastated because they didn't agree with the mainstream global narrative/response to the virus. Many felt pressured by their jobs to accept an intervention they did not want, in order to provide for their families. Others reached out with stories of bad reactions to the jabs, while too many were ostracized for not complying. All felt lost and invisible in the conversation. As heartbreaking as your stories have been to hear, they kept me from feeling entirely isolated – and kept me going through the most harrowing ordeal of my life.

"I can't thank you all enough for helping to hold me together when I felt I was falling apart. A year later I find myself somewhere I never thought I would be: happy. My career didn't end, it shifted into a new era.

"My primary focus has been working from my home studio writing and recording drum tracks, sound packs and loops for artists all around the world," Pete added. "It has been an incredible experience to feel creative again and appreciated for my contribution to so many works. I also found myself back onstage again, even playing the same venue as those who told me I would not be allowed. But most exciting of all, I have quite a few new band projects I am juggling, some of which I can't even talk about yet (soon I promise).

"It's an exciting time as I feel good about the work I am doing and re-energized about music again. To all those who have reached out with support, either publicly or privately, I offer my deepest gratitude. You lifted me and my family at a time when we needed it most.

"New people are still finding me every day and sharing their stories," Parada said. "I also really appreciate the civil exchanges with folks who don't understand my position, but have a deep love for me as a friend. These brave conversations give me hope that it is possible for us all to hold multiple perspectives. We gotta make room for growth – our own and everyone else's.

"I've learned as much from the folks who don't share my view as I have from those who do. I refuse to be divided. Here's to finding our way back to each other."

When he first announced his departure from THE OFFSPRING, Pete said a doctor had advised him not to get the COVID-19 shot because he has a rare autoimmune disorder. The musician said he first experienced Guillain-Barré syndrome, where a person's immune system damages their nerves, in childhood and the effects had got "progressively worse over my lifetime". He also revealed that he contracted COVID-19 over a year earlier and only had mild symptoms, "so I am confident I'd be able to handle it again", he wrote.

At the time, Parada wrote on social media that he was "unable to comply with what is increasingly becoming an industry mandate". As a result, "it has recently been decided that I am unsafe to be around, in the studio and on tour", he said.

Parada added that he had "no negative feelings towards my band". He wrote: "They're doing what they believe is best for them, while I am doing the same."

Last year, THE OFFSPRING encouraged fans to receive their COVID-19 vaccines by reworking the chorus of its 1994 classic "Come Out And Play" to say "you gotta go get vaccinated." The new version of the song was shared in March 2021 on THE OFFSPRING's Instagram, featuring a snippet from the song's music video with the reworked lyrics.

THE OFFSPRING singer Bryan "Dexter" Holland has a Ph.D. in molecular biology and wrote his thesis on microRNA in HIV genomes. The 175-page research paper, titled "Identification of Human MicroRNA-Like Sequences Embedded within the Protein-Encoding Genes of the Human Immunodeficiency Virus", had been published in PLoS One. Holland had received his Ph.D. from University of Southern California in 2017.

Last October, THE OFFSPRING canceled its concerts in Denver and Salt Lake City after guitarist Kevin "Noodles" Wasserman tested positive for COVID-19. He later wrote on social media that the shows were scrapped "out of an abundance of caution." He also revealed that he "was sick for 2-3 days at most" and credited the fact that he was vaccinated for getting "over it very quickly" and possibly saving his life.