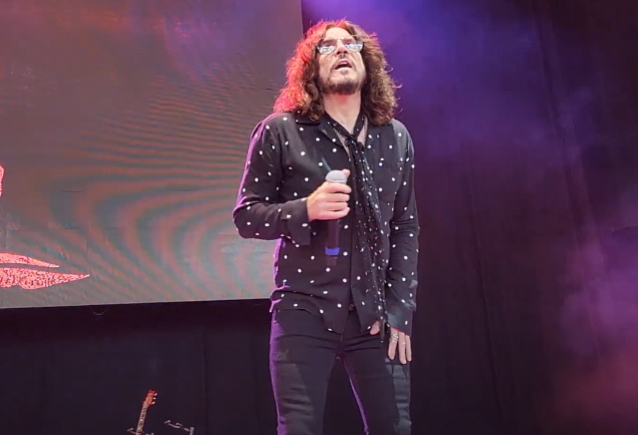 Former TNT and SKID ROW singer Tony Harnell has confirmed to Dr. Music that he is planning to write his autobiography. "I have started writing a book probably 10 times," he said (as transcribed by BLABBERMOUTH.NET). "So I have material. And what it's gonna take is me just continuing to write after I start. And I have so many good ideas. Even before I was a musician, my childhood is a crazy, wacky, weird, unusual story. There are a couple of things I tell people sometimes about it in one sentence, and they're just, like, 'Holy crap! How did you even make it here?'

"This is important, and it's probably one of the reasons I struggle so much with it: I want it to be a book that ultimately has some sort of message, some kind of outcome," Tony explained. "It doesn't have to be that my life is over. I want it to have some kind of a goal at the end. And I just haven't decided what that is exactly. It could just be telling the story, which is fine. But it's a wild story, and I want it to be a book that appeals to a wide group of people about what can happen in broken marriages — referring to my childhood and both my parents marrying multiple times as I was growing up — and just a lot of the different things that I experienced and how it affected my adult life and how it affected my career and decisions I made. There's just a lot there. But I want it to be done with love and in a way that is ultimately gonna help people. I don't want my story just to be… It's not about, 'Hey, look at how hard…' I mean, other people had it way worse than me; believe me when I tell you that. But at the same time, I do want it to have some kind of, 'Hey, I know what that feels like.' I wanna reach people and have it mean something."

Harnell celebrated the fourth anniversary of his getting sober in January.

Tony previously said that his drinking was partly responsible for him quitting SKID ROW via social media, explaining that it was "a really dumb" and "very unprofessional" thing to do.

Harnell joined SKID ROW in April 2015 as the replacement for Johnny Solinger, who was the band's frontman for fifteen years. Tony quit the group only eight months later, writing in a Facebook post that "being ignored and disrespected isn't my thing."

Tony later said in an interview with "Rock Talk With Mitch Lafon" that he made his exit official after going through was he described as "one of the most difficult times" in his life. "And the climax of it was the end of 2015, and I was in a bar, drinking way too much, was pissed off at the world, and did a stupid thing," he said. "And that was it. And it was very unprofessional. I've never done anything like that before, and I haven't done anything like that since. And I'm not proud of it."

Harnell went on to confirm that his drinking "played a role" in the way he went about quitting SKID ROW. "And a lot of people that know me would be, like, 'What? We never saw the guy drunk,'" he said. "It was my little private thing that a lot of people weren't really aware of — not even some people that were very close to me. So that definitely played a role. I wouldn't say that it was the only thing that was 'wrong' at the time, but it did play a role in the whole scenario."

Tony also claimed that he has since "apologized to both the band and the fans." He added: "It was a really dumb thing to do. That's basically all there is to it."

In April 2021, Harnell, who has been in and out of TNT several times throughout its four-decade existence, told "The Chuck Shute Podcast" that he didn't rule out returning to the band.