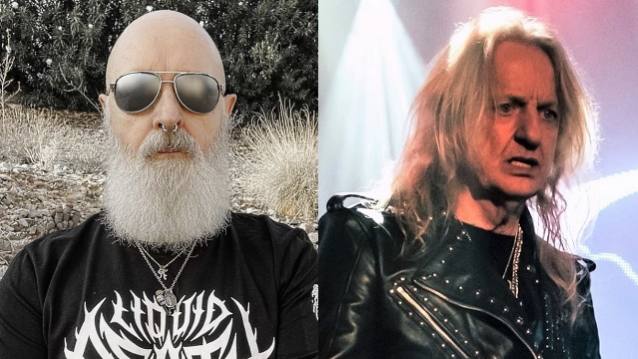 ROB HALFORD Says JUDAS PRIEST Has Been In Contact With K.K. DOWNING About ROCK HALL Performance

In a new interview with Ultimate Classic Rock, JUDAS PRIEST singer Rob Halford spoke about the band's upcoming induction into the Rock And Roll Hall Of Fame. PRIEST will receive the Musical Excellence Award at next month's event, which will honor Eminem, Dolly Parton, DURAN DURAN, Lionel Richie, Pat Benatar, EURYTHMICS and Carly Simon in the Performers category.

Halford told Ultimate Classic Rock that the PRIEST camp has been in touch with Downing and Binks about the upcoming induction, and "everybody's been very cool and agreeing. There's just been [an attitude of], 'Let's just relish this opportunity and jam and put everything on 11,'" he said.

Although Halford could confirm yet whether Downing or Binks will join PRIEST onstage during its Rock Hall performance, the singer said both former members will be involved in some capacity.

Earlier this month, Travis told the "Rocker Morning Show"'s Mark Frankhouse of the 107.7 RKR radio station that PRIEST will play "a medley" of "PRIEST classics" at the Rock Hall induction ceremony.

This past May, just days after it was announced that PRIEST would be inducted into the Rock Hall this year, Downing was asked which song or songs he would like to perform with PRIEST at the induction ceremony. He responded: "Oh, wow. I don't really know what the setup would or could be — whether Glenn" — who's battling Parkinson's disease but was on the road playing during the encores of PRIEST's latest North American tour, performing "Metal Gods", "Breaking The Law" and "Living After Midnight" — "would be there and we all would… I know Glenn is just playing some of the more shorter kind of songs. And if that's the situation, then I'm sure the songs would be whatever Glenn would be able to feel comfortable with. And that's okay, and that's fine. But I don't think it's about, really, what the repertoire would be; I think it's just about would this and could this happen in the way that people want to and expect it to happen. We'll have to see. But it's [early days], and it's over six months away, so anything could happen between now and then. And it depends what people want to happen, myself included. I'm gonna have a good think."

Downing reiterated that there were still a lot of unknowns about how the induction ceremony will go down and whether PRIEST will be expected to perform at the event.

"I don't know what's gonna happen, mate," he said. "The ceremony's some time in November. I don't know what's gonna happen. I don't know how everybody feels. Like I said, up until [last week], it was just a thought in the back of the memory. But now the hurdle of being inducted has been jumped, so we're on the other side of that now. Obviously, it remains feasible and possible, but I don't know. Anything could happen between now and then. We'll see what happens. But it is, I suppose, for all intents and purposes, a kind of celebration of everything that's been achieved over many, many decades, and do we all wanna be a part of that celebration just for one night. We'll see how everybody feels about that. But certainly, like with the Grammy achievement and the Rock And Roll Hall Of Fame, once we get into those rocking chairs, whenever that might be [laughs], at some point in the future, it'll certainly help us to rock a bit faster than everybody else around us, I think, really."

In February, Hill and Halford told Billboard that they would be happy to stand alongside Downing at the Rock And Roll Hall Of Fame induction later this year. "It's not a problem to us, no," Hill said. "Ken was an integral part of this band for a very, very long time. He deserves to be there along with the rest of us." Halford predicted that, "It won't be as awkward as Ace [Frehley] and Peter [Criss with KISS's Rock Hall induction]. I don't think it'll be awkward at all. I think you have to let all of that go because it's the night that matters. It's the moment that matters — but, again, the proverbial saying, we'll cross that bridge when we get to it."