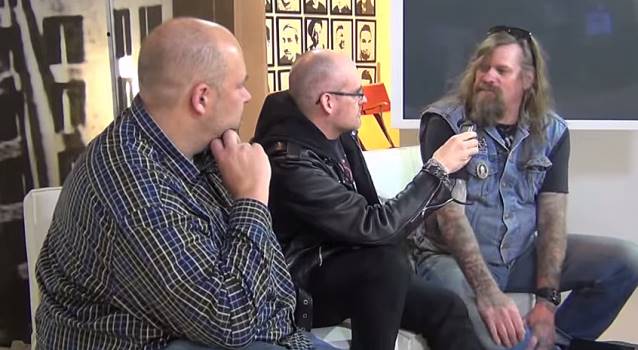 On March 27, Metallväktarna conducted an interview with former W.A.S.P. guitarist Chris Holmes during his visit to Finland. You can now watch the chat below. A couple of excerpts follow (transcribed by BLABBERMOUTH.NET).

On the infamous scene in the "The Decline of Western Civilization Part II: The Metal Years" movie in which he can be seen guzzling vodka in his pool:

Holmes: "I get a lot [of questions] about that. [People wanna know], 'Was it alcohol? Were you drunk?' Or whatever. Yeah, I was drunk. I'm not known to be a liar. In fact, I was real drunk; I couldn't even talk. So a lot of people ask me, 'How do you feel about that being on TV?' or whatever. The only thing I don't like is where some kid will come up to me and go, 'Man, that's the coolest! I wanna live like that.' And, to me, personally, that's, like, me going down the tubes. And why would somebody wanna live like that?"

Holmes: "I haven't drank since '96. I got six DUIs, and five of them, I didn't listen to [what was ordered by the court]… They make you do programs, and I went to jail for awhile, and that still wouldn't get me to stop drinking. I still drank. And then the sixth time, somebody promised me that 'never drink again' if I stopped for a year. He goes, 'Look at it this way, Chris.' He goes, 'You could always go back to it.' So I quit for a year. And [laughs] he's right. I don't wanna go and drink again, 'cause I've seen my friends do such incredibly stupid things drunk. [laughs] It's not appealing to me anymore."

On his reputation as a "mean motherfucker":

Holmes: "I've never been a mean person in my life… since Day One. I didn't write that song. [Editor's note: Referring to the W.A.S.P. track 'Mean Man', which was written by W.A.S.P. lead singer/bassist Blackie Lawless about Holmes' wild lifestyle and was dedicated to him.] Anybody that personally knows me, you can ask them. It's somebody's perception of them towards whatever they write about. I wrote a song on both my new albums — I've got two new albums; one came out last year — and I wrote a song on there called 'The Loser', and that's about him [pointing to a W.A.S.P. album cover with a picture of Blackie Lawless on it]. And I've got a new one on my new one called 'T.F.M.F.', on my new one, and until that's out, I really don't wanna talk about it. [But] it's about him [as well]. I'm sure he writes one on his album about me every time."

On what he was doing in Finland at the time of the interview:

Holmes: "The culture is changing in America. Nobody rocks anymore. It's totally changed; it's hip-hop now and stuff. And [me and] my wife, we were talking about it about a year ago. I go, 'I've gotta get out of here.' [And she goes], 'Where do you wanna go?' I go, 'I'd like to go to Europe.' I met my friend from [the Finnish hard rock band] BATON ROGUE MORGUE, Domino, and we called him up and said, 'Hey, how about doing some shows with you over there?' And he goes, 'Yeah.' So I decided to come over here. And I've got a plane flight back, but I don't think I'm gonna get on it. I'd like to stay here — at least until they get rid of me somehow. I don't feel like going back to L.A. [There are] too many kind of people I don't like over there."