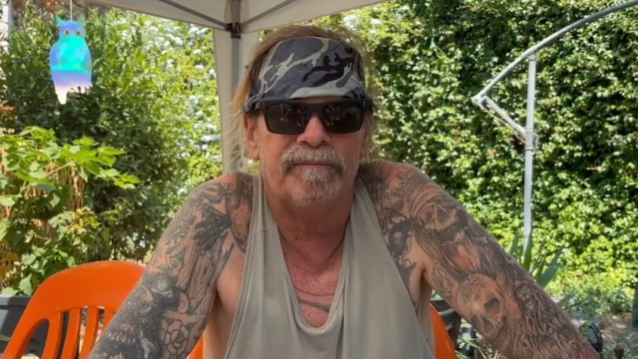 Ex-W.A.S.P. Guitarist CHRIS HOLMES: 'The Doctor Told Me That The Cancer Is Gone'

Former W.A.S.P. guitarist Chris Holmes recently completed seven weeks of radiation therapy in his battle with cancer in throat and neck. Earlier today (Friday, July 22),the 64-year-old musician shared a video update on his health, saying in part (as transcribed by BLABBERMOUTH.NET): "I went to the hospital last Monday. They did an MRI on my neck. And it's been three months since the last radiation I had. Anyway, they did an MRI and I went back Wednesday and they looked at the MRI and the doctor told me that the cancer is gone, which is a positive thing. I'm glad the kind of cancer I had is treatable. A lot of cancer isn't.

"Anyway, as of now, I'm still suffering from all the radiation that was done to my neck," he continued. "I still can't taste anything... It'll probably take six months from right now till my neck's back to normal.

"Last month when I talked, I wasn't that coherent, because I'd stopped taking morphine June 10th. And let me tell you, the comedown off the morphine was radical; I'd never been through anything like that in my life. You can sleep only an hour a night and then you're up. And your brain ain't working right. I really feel sorry for what heroin addicts go through, man. It's the first time I ever felt the comedown off the morphine.

"I'm getting better. I'm probably 65, 70 percent," Holmes added. "By next September — it's July now; 20th or something — September I'm supposed to be, yeah, touring in Canada. Finally, after three years. But, yeah, I'll be in Canada tearing it up. So be there."