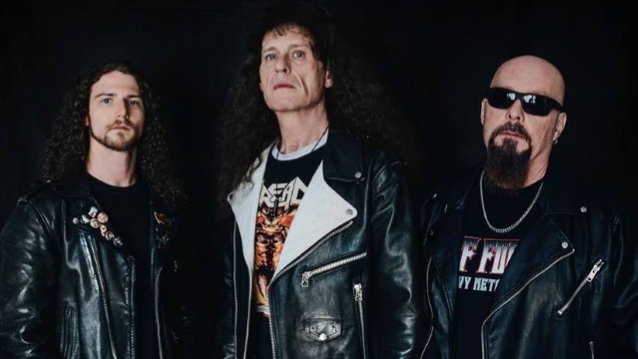 Guitarist Daniel Dekay of Canadian thrash metal pioneers EXCITER spoke to Metal Crypt about the progress of the songwriting sessions for the band's long-awaited new album. He said: "I think we were hitting a good streak with writing and demoing prior to the pandemic, and then the pandemic hit. Al [bassist Allan Johnson], [drummer/vocalist] Dan [Beehler] and I live in different provinces in Ontario and Quebec in Canada. There was a travel ban between provinces. Old-school heavy metal sometimes means old-school mentality, which means not fully embracing technology. For us to write music and record music, we need to be in the same room. The pandemic really put a very fast stop to us getting together to work on music. By the time we were able to get back together in the same room, it was already time to get back to working on a live set."

"Honestly, man, it's going to be a case of getting through these shows that we've had booked for two years. In August, we fulfill the rest of our Euro shows. We have three festivals, a couple of Scandinavian shows, and some U.K. shows that have been booked forever that we need to do. There's a couple of U.S. shows in October, November. After that, we should be able to focus on writing again. The intention is still to release a full-length record and to give the fans what they want. Even in my contributions, I do like to make EXCITER my own in the style that I play John's [Ricci, former EXCITER guitarist] songs and the style I play Brian McPhee's [former EXCITER guitarist] songs. I do try and make it my own, but at the end of the day, for a new record, I want my influence to be felt, but I want it to be true EXCITER for the old-school fans because they deserve that, and the intention is still to put out a full-length record. I just don't have more of a timeline and we have to get through these live shows first. Then we can get together. We do it the old-school way. We like to be in the same room."

Asked who is responsible for the bulk of the songwriting for the new EXCITER material, Daniel said: "Dan and Al completely. Dan and Al get together and flesh out songs. It's incredible. Dan Beehler is a drummer who doesn't play guitar, but he'll hum riffs to you. He hums a riff. He's, like, 'Yes, I want a picking part to sound like, [humming a rhythm] I'm like, 'All right.' You flesh it out that way. It's very old school, man. It's very, very cool. Dan and Al telling me this is how they wrote songs in the '80s. Someone would come to the room with an idea or Dan would have an idea and hum it out, and John would play it on guitar, or Dan's brother, Richard, was the fourth member of EXCITER. He would help out with songwriting and songtitles and lyric ideas and all sorts of stuff. It's always been a cool collaborative effort. Dan and Al really, they get together and bless their souls, man, they get together, and they come up with some crazy cool ideas. Then they send me their ideas that they recorded at the jam space together and I add on from there. It's a really cool collaborative process, but they're definitely predominantly the songwriters. They know what they want and I'm happy to facilitate their vision however I can."

Regarding a possible new label home for EXCITER, Daniel said: "Yes, there are three labels that e-mail me weekly asking when I'm going to have a record to send them. I don't know which of the three labels that we'll end up with. Maybe it'll be a fourth label. Yes, there's significant interest. Literally weekly I get a check-in from someone at a label asking if I have a record for them yet. They're willing to make offers without even hearing a song. It's pretty funny. Yes, there's lots of interest. I'm sure that we're going to find a great home for the album. We'll go with whatever feels right."

In March 2020, Beehler told Australia's Metal Mal that the current lineup of EXCITER is "the best version" of the band "ever." Regarding how Dekay came to join EXCITER, Beehler said: "[Daniel] lives in Toronto, but he's originally from Ottawa, our hometown. And through friends and family members, and through my daughter, he's been a friend for many years. And he was in a local band called AGGRESSOR, which I've seen many times. [I've] met his dad many times.