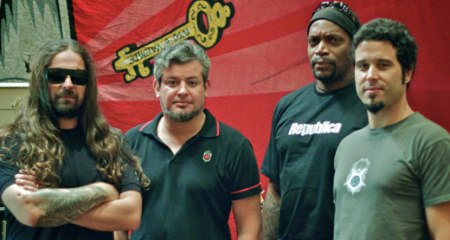 Brazilian/American thrashers SEPULTURA have set "Kairos" (an ancient Greek word signifying a time in between, a moment of undetermined period of time in which something special happens) as the title of their new album, tentatively due late spring/early summer via Nuclear Blast Records.

Speaking exclusively to BLABBERMOUTH.NET, SEPULTURA guitarist and main songwriter Andreas Kisser said, "The whole theme of the album is the concept of the time, and the title reflects that — it's like one concept of time which is not chronological, from one to two; it's like a an instant in time, it's a special time of change..."

He added, "Everyone's life is written by [their] choices — you have many 'kairos' moments, like if you go [from] point A [to point] B [to point] C, you are driven by your choices or your guidance; you have to go either one way or the other. And that's the kind of time we talked about — not about aging or getting old or going back [in time]; it's just [about those important] moments that can change everything. Like Martin Luther King's speech in Washington D.C. that day, it was a 'kairos' moment that changed the world, pretty much, the direction that we talked about certain things and the way we lived our lives, etc. And in that respect that's what we thought about [in regards to] SEPULTURA itself — 26 years of history and the moment where we are now; why we're here; why we're doing this album and why we have what we have; the changes we have inside and outside the band. It's a collection of 'kairos' [moments] that [got us] here. It's being inspired by our own biography, but mostly [focusing] on what SEPULTURA is today. It's the opposite of [nostalgia] — it's living the moment. Nostalgia is being in the past, trying to relive stuff, and we're not doing that; we're doing something new today."

The artwork for "Kairos" is being created by Erich Sayers, a Los Angeles-based freelance digital artist and photographer whom SEPULTURA first met at the band's January 14 concert at the House Of Blues in West Hollywood, California.

SEPULTURA's new CD was recorded at Trama Studios in São Paulo, Brazil with producer Roy Z. (JUDAS PRIEST, HALFORD, BRUCE DICKINSON, HELLOWEEN). 13 tracks were laid down during the sessions, including cover versions of MINISTRY's "Just One Fix" and THE PRODIGY's "Firestarter", both of which are expected to be made available as bonus tracks on various special-edition releases (although, according to Kisser, they turned out so well that they may also make the regular version of the album). Among the songs that will appear on the effort are "No One Will Stand" and "Born Strong", which are said to deal with balancing road life with raising a family as well as the bandmembers' experiences as musicians and as people.

The band debuted a brand new song from the upcoming CD during an October 17, 2010 appearance at the Fúria Festival at HSBC Brasil in São Paulo.

BLABBERMOUTH.NET's entire interview with Kisser will be published in the coming days.

SEPULTURA's last album, "A-Lex" was the group's first LP to be recorded without either of the founding Cavalera brothers (Max and Igor; on guitar/vocals and drums, respectively). On the CD, which came out in January 2009, Kisser and his three colleagues, Derrick Green (vocals),Paulo Xisto Pinto Jr. (bass) and new addition Jean Dolabella (drums),dedicated themselves to Anthony Burgess's book "A Clockwork Orange", creating an awesome thrash metal opus around this timeless and exciting subject.

SEPULTURA will return to North America for a massive headlining tour next April/May in support of their upcoming Nuclear Blast Records debut. Joining them will be a veritable united nations on metal in the form of Austria's BELPHEGOR, Norway's KEEP OF KALESSIN, Poland's HATE, Canada's NEURAXIS, and California's BONDED BY BLOOD. Starting May 23, Seattle's own NEVERMORE will replace BELPHEGOR to finish out the tour.

Photos below by Estevam Romera