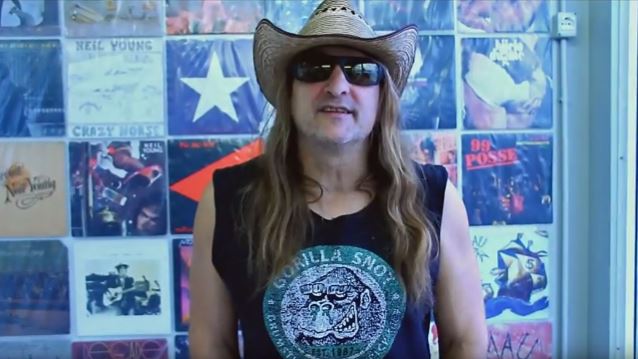 EXODUS Drummer TOM HUNTING: Being Able To Play Music For A Living And Tour Is A 'Gift'

Asked about the differences in the way music is being marketed in the age of the Internet and streaming services like Spotify and Apple Music, Hunting said: "It's definitely a different time. It's cool that the music is more accessible to people, even though bands don't make money off it. I mean, you pretty much have to go on tour and play live and sell [merchandise] and stuff like that. But the fact that it's getting out there is kind of a beautiful thing, I guess."

He added: "I grew up in the age of albums. I stood in line to buy 'Back In Black' [by AC/DC], and that kind of shit will never happen again."

Hunting was also asked what advice he would give to young, up-and-coming bands who want to break into the music business. He said: "I would say, first, make your own steps. Be true to what you do and just try to write good songs. And if you're lucky — 'cause I think elements of luck play into things too… And also you've gotta kind of humble yourself to what you're doing. If you love to play music for a living and go travel and meet people, it's kind of cool. It's kind of a gift."

Hunting recently told Spark TV that EXODUS will begin work on the follow-up to 2014's "Blood In Blood Out" album in January 2017.

Tom expressed hope that EXODUS could release the next album "in the middle, or towards the end of 2017," he said. "I wanna take our time, though. It's not really how much material you put out at this point; it's gotta be good. I'm more concerned about it being good than [being released] fast."

"Blood In Blood Out" was the band's first album since the departure of EXODUS's lead singer of nine years, Rob Dukes, and the return of Steve "Zetro" Souza, who previously fronted EXODUS from 1986 to 1993 and from 2002 to 2004.