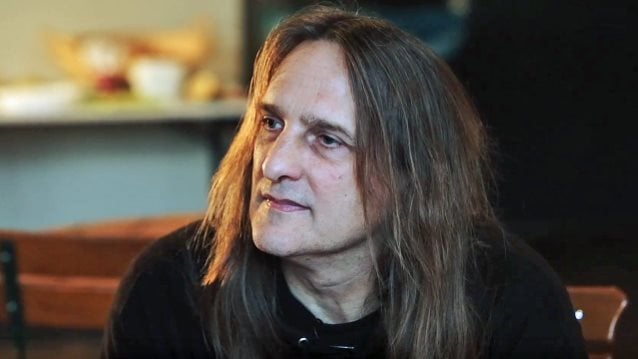 Sebastiano Mereu of From Hero To Zero recently conducted an interview with drummer Ton Hunting of San Francisco Bay Area thrash metal veterans EXODUS. You can watch the chat below. A couple of excerpts follow (transcribed by BLABBERMOUTH.NET).

On the differences in how albums are made and released today compared to how it was back in the '80s:

Hunting: "Well, there's a lot of differences, I think. As far as creating an album and making music, that stays the same; it's pretty much the same formula. Some people do trading [files] over the Internet — the guitarist will write a riff and send it to this guy: 'Check this out.' We do it old school; Gary [Holt] or Lee [Altus] will write a riff and we'll jam it out in a room. As far as making a record, I think the hardest thing nowadays is just to keep things secret until it comes out. I mean, the Internet, it's kind of a blessing and a curse where that's concerned. But we've survived through both eras — the Internet era, which is now, and the era of the past, where… It sucks to get older, but I'm really happy to have lived through that — to where you would go to a store and buy an album. You waited for that album to get created and you go home and you slice the plastic and you pull out the sleeve… You know what I mean? It told a big story. And I think that's probably what's missing today, and that will never happen again. Unless vinyl really resurges."

On whether he misses the days when physical sales of EXODUS albums were significantly higher than they are now:

Hunting: "Well, sure. I mean, the sales are what keeps us going. If nobody bought the music at all, then we would probably be forced into retirement, 'cause, basically, bands — and not just speaking for us — a lot of bands… I mean, aside from METALLICA or Beyoncé or people who come out of the gate selling eight hundred thousand copies the first day, we have to tour. We're kind of, basically, traveling t-shirt salesmen. And it's okay, 'cause it takes us to amazing places in the world, and we love seeing other cultures and having other foods and seeing how the rest of the world lives. I think it's the best education you can get in your life, for sure. It takes away any illusions or ignorances about the way the rest of the world gets on and lives. So it's fine."