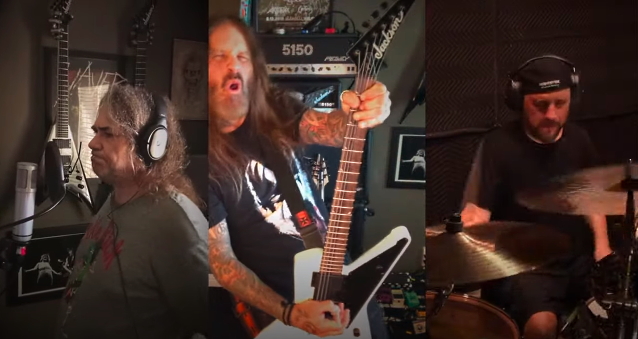 Phil uploaded the video to his YouTube channel, writing in an accompanying message: "Back in the early 80' Zet's brother John and I convinced him to sing for our band, ON PAROLE. He helped introduce me to the Bay Area music scene and between the 2 of them, tried their best to corrupt my adolescent ways. Zet would sing the lyrics to this song and do his best Jello Biafra impersonation, it's been embedded in my head so much that I needed to bring it to life and jam this out.

"I reached out to Dave Lombardo because I knew he LOVED the DKs and would help me add some power since I tracked 2 over-driven guitar tracks. I then reached out to my bud Lars from RANCID and he suggested the RANCID bass player, Matt who has played the song many times before and would nail it. He did.

"I picked this one before all the recent activity so this song isn't any kind of statement or declaration. It's 4 dudes jamming music.