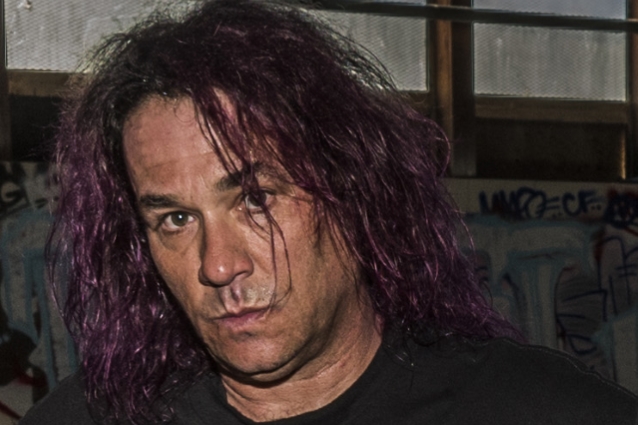 Souza made his comments while giving an interview to Impact metal channel in early July in Budapest, Hungary.

Asked for his opinion on the state of U.S politics since Trump's election, Souza said: "The economy in the United States… the unemployment is the lowest it's ever been in the history of the United States. I think [Trump] making the attempt to go to meet [North Korean leader] Kim Jong-un, I think that's great — that's what you need to do. People need to touch together, not do it through channels.

"So I love the country I live, I support it, and I support the president."

Souza's views appear to be drastically different from those of his bandmate, EXODUS guitarist Gary Holt, who said about Trump in a 2016 interview: "You can't believe anything he says, 'cause he's a serial liar… He won't even condemn David Duke's support. He pretended he doesn't know who he is… That was your moment, Donald Trump, to say… you know, to condemn the man, basically, but you pretended you were just ignorant of who he was, 'cause you don't wanna fuck with that vote. There are some fucking hillbillies out there who you want voting for you."

Holt added that he has had productive discussions about the current political situation with his bandmates, some of whom don't share his views. "I know people, including my own bandmembers in EXODUS, who, you might not agree with them, but I'd love to see some uptight, metal-hating, I-know-everything-about-politics dude go up against [EXODUS bassist] Jack Gibson in an argument," he said. "It might come to a draw. It's a debate — like, if you disagree with him, you're not gonna win — but he knows his fucking facts. And we're not all idiots. We actually do know what's going on in the world around us."

In a 2010 interview with Live Metal, Holt shot down the perception that the members of EXODUS were all ardent supporters of the Republican party: "People accuse of us being this right-wing band, but we're a band of many political views," he said. "I'm a liberal who supported and voted for Barack Obama. [Guitarist] Lee [Altus] and Jack are dyed-in-the-wool Republicans."

It was reported last month that the U.S. economy grew at the fastest pace in almost four years. Second-quarter economic growth came in at an annual rate of 4.1% — the best showing since the third quarter of 2014, when Barack Obama was still president.

In July, the U.S. unemployment rate fell one-tenth of a percentage point to 3.9 percent, near the lowest in 18 years. The all-time low came in 1953, when unemployment fell to 2.5 percent during the Korean War.