As San Francisco Bay Area thrash metal legends EXODUS are just finishing their summer run across Europe, the band has announced that it will return to the continent in November and December to headlline the 2018 edition of the renowned "MTV Headbangers Ball Tour", which will lead them through 17 cities and venues in nine countries. The outstanding lineup will be completed by newly re-structured Ruhr Area thrash heroes SODOM, U.S. metal act DEATH ANGEL plus Greek underground champions SUICIDAL ANGELS.

EXODUS frontman Steve "Zetro" Souza commented: "We are absolutely excited about coming to Europe for 'MTV's Headbangers Ball Tour' in late November, and in December!!! Europe has always been considered our second home and our tour this summer was amazing, from all the festivals, to the headlining shows, horns way up to all those who attended, and all of you we will see when we come back across the pond once again! And what a great lineup: SUICIDAL ANGELS, our brothers from the Bay Area DEATH ANGEL, Germany's SODOM and EXODUS!!!!! I can hardly wait for this metal onslaught!!!! See you maniacs in the pit!!!!!"

A new tour trailer can be seen below.

Souza recently confirmed that fans will have to wait until at least the end of 2019 before the band's follow-up to 2014's "Blood In Blood Out" album. Although it was originally reported that the veteran San Francisco Bay Area thrashers would go into the studio last October to begin recording the new effort, it now appears that the band will not begin work on the next disc until Holt is done playing with SLAYER. 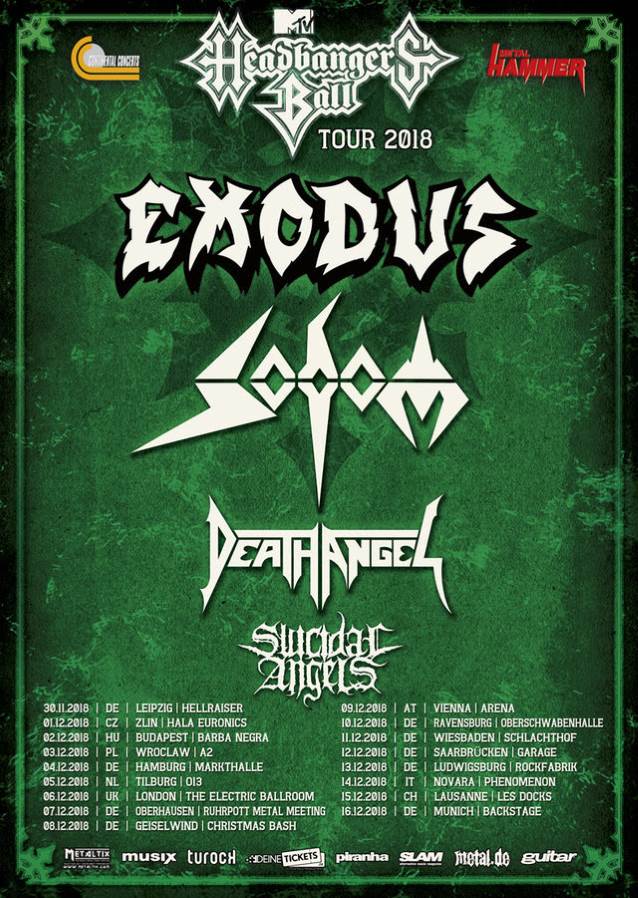