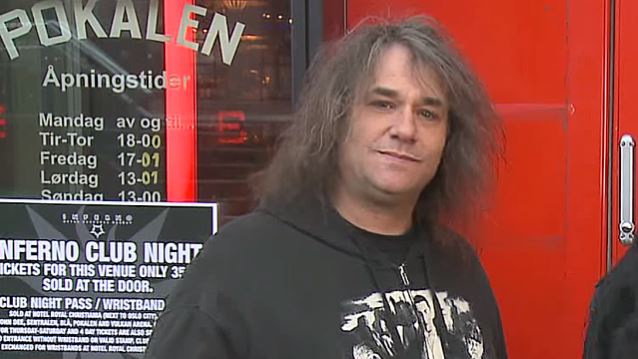 EXODUS Will Be Part Of 'Huge Package' Tour In Europe This Fall, Says STEVE 'ZETRO' SOUZA

Jasmin St. Claire conducted an interview with vocalist Steve "Zetro" Souza of San Francisco Bay Area thrashers EXODUS at this year's edition of the Inferno festival, which was held March 23-26 in Oslo, Norway. You can now watch the chat below. A couple of excerpts follow (transcribed by BLABBERMOUTH.NET).

On what it has been like since he returned to EXODUS in 2014:

Zetro: "A blast. We had so much fun doing it. This time around, for me, has been the best time, actually, because there's no distractions. A lot of things have happened over a thirty-period in life that… You're in the band, you're out of the band… personal things that happened. And now all those things are taken care of, so EXODUS in No. 1 in the life again, and I'm having fun on tour and we're kicking ass every night, and it's killer."

On what he was doing during his time away from EXODUS:

Zetro: "Well, actually, I've been a union carpenter for twenty years, even the years that I was in EXODUS. And it was funny: right when I rejoined EXODUS, the union sent me my twenty-year pin. So… I got my twenty-year pin and went back into music."

On how fans have embraced him since he returned to EXODUS:

Zetro: "Even today I'm hearing it at every show. They're, like, 'Thank you,' thanking me for coming back. And I'm, like, 'Well, you kind of have to thank the [other] guys [in the band] for that, because that was their decision.' But it feels good to be back. I've always felt that a singer is a very focal point of the band, and when you take the voice away, you take a certain dynamic away. And I was there when the band was being built, so I think people are pleased that I'm back, and I'm pleased to be back."

On EXODUS's plans for the remainder of 2016:

Zetro: "We actually come back in July and August to do the festival run for the later part, 'cause we did the May and June festivals last year. And then we're actually coming back in October and November on a huge package thing that I can't talk about, 'cause they said, 'You can't say nothing.' But it's like a present I wanna open right now and show… It's a present. And so we'll be back here two more times in Europe. And we're doing Loud Park [festival] in Japan. And we're doing another festival in Mexico City with RAMMSTEIN."

Guitarist Gary Holt was unable to take part in EXODUS's recent European trek due to his commitments with SLAYER. Filling in for him once again was HEATHEN guitarist Kragen Lum.

EXODUS's latest album, "Blood In Blood Out", was the band's first album since the departure of their lead singer of nine years, Rob Dukes, and the return of Souza, who previously fronted EXODUS from 1986 to 1993 and from 2002 to 2004.