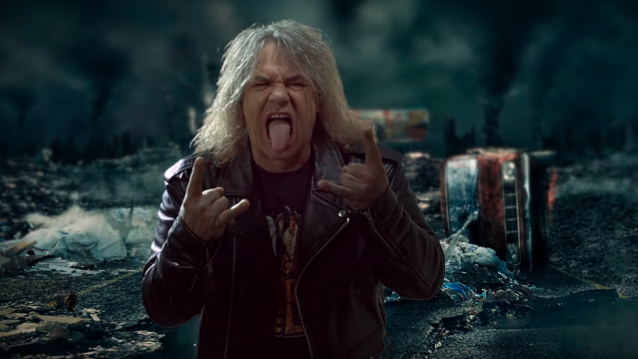 EXODUS's STEVE 'ZETRO' SOUZA: 'I'm Not Ready To Die Or Check Out Yet'

In a recent video question-and-answer session with fans, EXODUS's Steve "Zetro" Souza was asked how he stays motivated after all these years. The 56-year-old singer responded (see video below): "I'm a ball of energy. I never say die. I'm not ready to die or check out yet. I have so many things that I want to do still musically, professionally, in life and everything. So I'm not ready, by any means, to check out. I believe when you slow down is when you start to think about having to check out, and I'm not into that — I'm not at all. I'm very much into keeping going and keep pushing. If you're 90 years old and you go to to the gym every day or go out walking, God bless ya — if there's a God."

EXODUS is scheduled to enter the studio in September to begin recording its long-awaited new album.

The San Francisco Bay Area thrashers' next disc will be the follow-up to 2014's "Blood In Blood Out", which was their first release since the departure of the group's lead singer of nine years, Rob Dukes, and the return of Souza, who previously fronted EXODUS from 1986 to 1993 and from 2002 to 2004.

EXODUS guitarist and main songwriter Gary Holt discussed the band's plans for a new studio LP during a June 17 question-and-answer session on the Marshall Amplification Instagram. He said: "I'll be in the studio in September. [We're] writing right now. We've got about six songs done and about a million riffs. And it's crushing. We all say that, right? I'm not kidding. It's something else. People are gonna hear this record and they're gonna go, 'Holy shit! EXODUS is up to no good.'"

Souza had an early stint as vocalist for LEGACY (later TESTAMENT),and has also played with DUBLIN DEATH PATROL, TENET and HATRIOT.