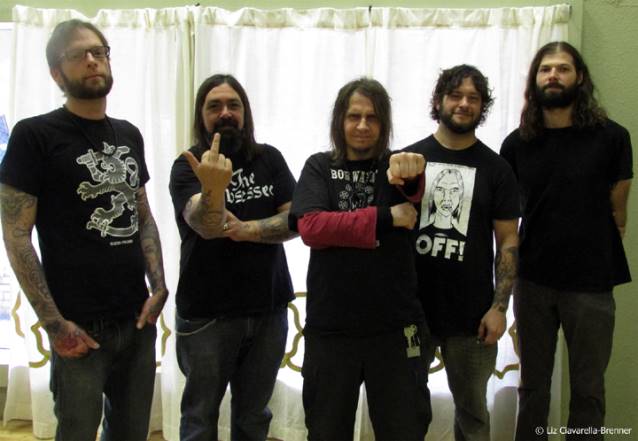 Hill will play his first official show with EYEHATEGOD tonight at the world-famous House Of Shock with horror surf band THE UNNATURALS. From there, the band will ride on to take Columbus' Arosa Villa on November 1 and bring things to a chaotic close with two back-to-back nights of mischief at Chicago's Cobra Lounge November 2 and November 3. Later next month, EYEHATEGOD will stomp their way through Brooklyn, New York; West Chester, Pennsylvania; and Quincy, Massachusetts; with additional live takeovers to be announced in the weeks to come.

The ever-elusive new EYEHATEGOD LP is moving closer to release, with mixes being done by renowned sound wizard Sanford Parker as we speak.

LaCaze passed away on August 23 in New Orleans after a very successful five-week U.K. and European tour with EYEHATEGOD. He also performed ceremonial voodoo drumming and in numerous solo experimental electronic projects. Doctors confirmed to family members the cause as respiratory failure. He also suffered from severe long-term asthma.