FALL FROM GRACE To Release Debut In November

FALL FROM GRACE signed to Bunk Rock Records after beating out over 10,000 bands in the infamous nationally televised battle of the bands on Fuse TV. FALL FROM GRACE proved to be champions with a landslide of audience text and call-in votes, and gained constant praise by a panel of celebrity judges including: Johnny "Rotten" Lydon (SEX PISTOLS),Billy Duffy (THE CULT, CIRCUS DIABLO) and Bif Naked.

FALL FROM GRACE is a hard rock phoenix rising from the ashes of adversity. Each of the four band members (Tryg Littlefield - vocals, Brian Olson - guitar, Ken Olson - bass, Kenny Bates - drums) is a walking testament to the saying "that which does not kill you makes you stronger." Creating music for the masses, each song is a story of struggle and triumph.

Stated Tryg Littlefield: "FALL FROM GRACE is a message, about how trials and tribulations in life will constantly try to knock you down, and as an individual you to rise above those situations, and persevere. We all fall from grace at one point or another, but it's up to you to be strong and carry on."

"Sifting Through The Wreckage" track listing:

FALL FROM GRACE live and play in the underbelly of the Seattle scene, hitting the hardcore clubs and breathing life into a new movement they are building, one that is breaking through with the help of acts like AIDEN and AMBER PACIFIC. This band has come together and faced the darkest of times but has spun it in a way that brings the message of hope and hard core happiness to all who hear it. 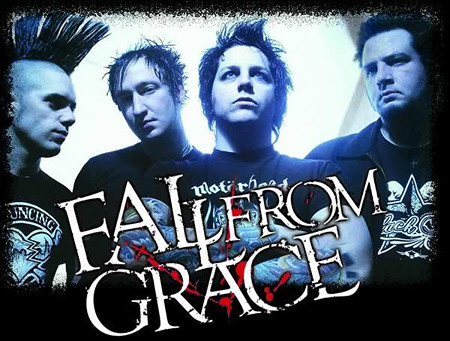