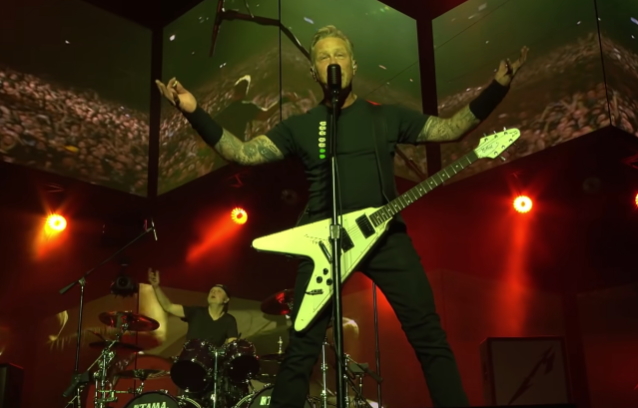 AXS TV has uploaded the premiere episode of "Parking Lot Payday" in which devoted fans at Allegiant Stadium in Las Vegas test their knowledge of all things METALLICA.

Do you know how many studio albums METALLICA has released? Or what character from "The Simpsons" got to meet the heavy metal maestros in a 2007 episode?

Just an FYI: these fans aren't playing for METALLICA brownie points; they get cold hard cash for every right answer.

Five years ago, METALLICA drummer Lars Ulrich spoke to the 98 Rock radio station about the pressure he and his bandmates feel to keep their hardcore fanbase happy every time they release a new album or pursue a new creative endeavor. He said: "You've gotta keep your eyes open to what's going on around you, and all four of us are connected enough to reality to sort of… We're not aloof or detached to the point where we don't, obviously, know what's going on around us. But it's a fine line where you try to make sure that that doesn't influence the choices that you're making, both creative or in terms of the gigs you're playing or t-shirts or pricing or whatever.

"We appreciate it, we love it, we're obviously honored, blessed, humbled — all the rest of that — but at the same time, you also have to have just enough of a detachment away from it so it's not something that you become enslaved to," he continued. "Because you don't want the choices that you're making to end up being artificial because of trying to serve your fanbase, 'cause I believe ultimately… You serve your fanbase by having the best social media that you can, by showing up on time, by doing meet-and-greets, by doing interviews, by playing gigs and having cool shirts and all that, but you wanna make sure that the music, at least, is always as pure and organic and an honest extension of yourself, because that ultimately is what I believe they want, and that they want the music to be pure.

"You know curling, where they throw that thing that looks like an oversized ashtray or something, they throw that down the ice, and then a bunch of dudes are in front of it kind of sweeping, so the path of the curling ball, or whatever you call it, is pure and unaffected. That's kind of how I look at the METALLICA music; you want the music to be pure and unaffected by what the people want from you. The guys in front of that is the bandmembers trying to make sure that the path of METALLICA forward is as pure as possible, as unpolluted as possible and as unaffected by too much thought or too much playing into what people want from you."