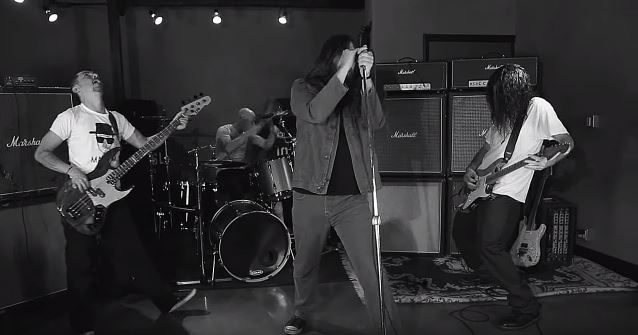 "Scapegoat" appears on the band's debut album, "Farmikos", which was released this year to critical acclaim. The disc features ten original songs written by Holmes and Locke, with writing contributions on eight songs by Brent Hoffort.

The individual tracks and entire album are available as a digital download and on compact disc formats through iTunes, Amazon, Google Play and CD Baby.

FARMIKOS is Joe Holmes's first venture under his own flag since first attaining local notoriety with TERRIFF, an L.A. band he formed after taking guitar lessons as a teenager from none other than original Ozzy axeman Randy Rhoads. Holmes eventually went on to replace ALS-stricken Jason Becker on the 1991 David Lee Roth "A Lil' Ain't Enough" world tour.

Says Holmes: "I really wanted to do my own thing and once Robbie came into the picture things really started to fall into place. It's taken us a bit longer than anticipated to get to this point but we're proud to finally present FARMIKOS to the world."