Vocalist Blade of the Swedish hard rock band FATAL SMILE received the terrible news early yesterday while he was on his holiday in Thailand that his house was on fire (see photo below). According to a press release, 13 fire trucks fought the blaze for over 12 hours but couldn't save the singer's home.

The members of FATAL SMILE had just returned to Sweden from their successful European tour and were looking forward for some time off before their next tour early next year.

"S.O.B.", the new video from FATAL SMILE, can be viewed below. The clip was directed by Aestheticom's Bill Schacht, who has previously directed music videos for SAXON, DIO, KING DIAMOND, AMON AMARTH, LIBERTY X/REV RUN, ZAKK WYLDE and SISTER SIN, among others. The video, which includes an appearance by the coach of Sweden's national boxing team Leif "Leffe" Carlsson, was shot earlier this year in Stockholm at Globen and Hovet.

FATAL SMILE released its third album, "World Domination", in the U.S. on April 8 via Locomotive Records. The CD, which was issued in Europe on February 15, was mixed by the legendary producer Michael Wagener (METALLICA, OZZY OSBOURNE, MÖTLEY CRÜE). 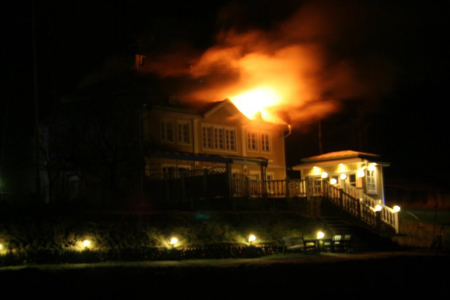