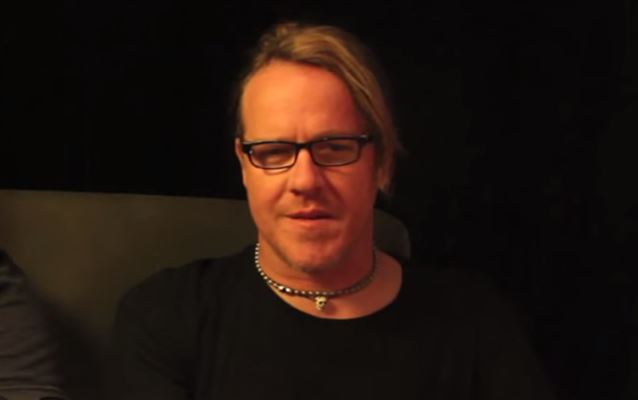 FEAR FACTORY's BURTON C. BELL: 'PANDORA And SPOTIFY Are Getting Away With Murder'

FEAR FACTORY frontman Burton C. Bell says that streaming music services like Spotify and Pandora are "getting away with murder" by not paying songwriters a fair royalty rate because of the consent decrees that govern how the vast majority of American songwriters are compensated for their work.

Under a "consent decree" issued by the Justice Department in 1941, the moment someone requests a license from ASCAP and the other main publishing royalty organization, BMI, which together control about 90% of all commercially available recorded music, ASCAP or BMI must say yes — before they can negotiate price. When a fee can't be agreed, a rate-setting court decides the percentage amount of royalties these license holders pay in exchange.

ASCAP and BMI, as well as individual songwriters and publishing companies, have long lobbied for changes to the consent decrees, arguing that the current system fails to take into account innovations that have significantly changed the field, such as digital music played on streaming services such as Spotify and Pandora, and claiming that the system under-compensates their members for these rights.

Asked by Rodney Holder of Australia's Music Business Facts for his opinion on the way streaming services like Spotify and Pandora are changing the landscape of the music industry, Bell said (hear audio below): "I'm part of ASCAP, which is a royalty collection company, like BMI. ASCAP collects my royalty [for songs] that are played live [and on] radio [and used] in movies, commercials… whatever.

"Streaming is a very debated issue right now, because companies like Pandora and Spotify are getting away with murder, basically, because they are going with a contract… they are going with a trademark agreement written in the 1940s to pay the artists the least amount of royalty possible, because in the 1940s, there was no such things as the Internet, and they never expected it. So, because of that, they're using this copyright/trademark law that was written to get away with paying the artist literally nothing. For instance, an artist like Adele — multi-platinum artist. One of her songs, 'Someone Like You' or whatever, had over 11 million listens on Pandora. The person who wrote that song, because of the royalty rate, only got paid 11 thousands dollars. For over 11 million million hits [or] listens on Pandora! That's fucking ridiculous! And that's what they're getting away with, and Pandora is fighting to keep it that way."

He continued: "ASCAP invited me to a conference. I live on the East Coast, in Pennsylvania, and it just so happens that the area that I live in, my state representative, named Tom Marino, he is on the board to rewrite these trademark laws, to change them. And so ASCAP had a bunch of local artists — I happen to be one of them — who are signed up to ASCAP, who, basically… it's important for them to get a proper royalty rate to survive. So we met with this representative and we all sat and discussed, like… 'This is our living. This is what we do.'"

Bell went on to say: "Pirating is bad enough. People think it's okay to steal downloads and music for free — they think it's okay — but would they enjoy it if I walked into their house after they created a meal for their family, I'd just pick it up and take it? It's, like, 'Oh, it's free.' It's the same thing. You just made this for your family to survive.

"I do records, one, because it's my passion, and two, so me and my family can survive, and you're just gonna take it? For free, without paying for it? That's the analogy we give.

Bell added: "Taylor Swift… She's a fine example. I'm not much of a fan of her music, but I respect the woman immensely, because she is one of the fiercest fighters for artists about this… over this situation. So I highly respect Taylor Swift, 'cause she fiercely fights for us, and it's amazing."

According to Bell, the solution to the complex issue of illegal music downloading is simple. "I just think that people need to be educated," he said. "Especially the younger generation that feel that they're entitled to everything for free — free Internet. Which is not the case. People work hard to make this. And there needs to be stipulations and things put into place so people start paying for things again. 'Cause it needs to happen."

He continued: "Napster, as genius of a technological revolution it was, it fucked a lot of people — it really did. And it created a mentality of, 'Oh, shit! It's free. Everything's free. Wooo!' It really created a negative impact. And it's really sad. But at least there is one aspect of the metal community… The metal community is one of the communities of music that do continue to buy albums — CDs and vinyl — which is pretty strange. The metal community is very passionate about the music. And every day on stage, I'm announcing that we have a new record coming out and I'm also saying, 'If you love the music, you need to support your favorite artists. Because if you do not support your favorite artists, there's no way that your favorite artists will be able to come out here and play for you.' And I put it that way. 'Cause if you put it in that context, it's, like, 'Well, if I don't support them, they won't be here for me? What?' Yeah. It's true."