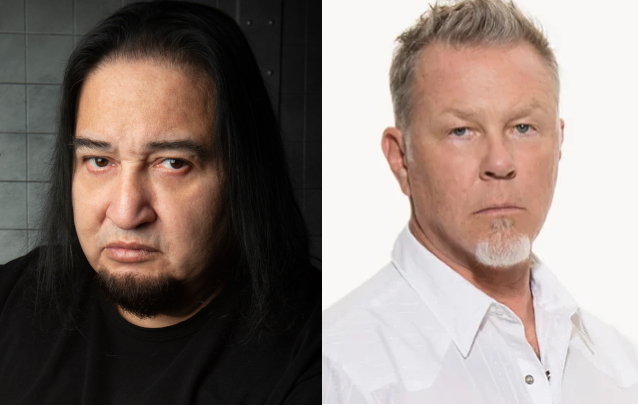 FEAR FACTORY guitarist Dino Cazares was recently interviewed on "Speak N' Destroy", a podcast about all things METALLICA, hosted by longtime journalist and METALLICA fan Ryan J. Downey. Dino talked about his upbringing; discovering METALLICA; the right hand of James Hetfield; touring with METALLICA in 2010; making sandwiches for former METALLICA and current MEGADETH guitarist Dave Mustaine in the early 1980s; getting FEAR FACTORY music to Tom Araya in a brick of weed; the history of his band, the search for a new FEAR FACTORY singer to replace Burton C. Bell, and how METALLICA shaped the FEAR FACTORY sound. You can now listen to the lengthy chat below.

Speaking about how Hetfield's rhythm playing inspired him, Cazares said (as transcribed by BLABBERMOUTH.NET): "I can tell you everybody combined that influenced me. It comes from [AC/DC's] Angus Young. That's where it comes from — the chords. Of course, you've got your Tony Iommis, and all that stuff was cool for when I began. But when I first heard METALLICA, when I first heard [James Hetfield's] right hand, I was, like, 'This is what I wanna do.'

"Everybody you get a piece of something from, but when it comes to down picking, when it comes to those kind of rhythms, James Hetfieldwas the man," Dino continued. "And the way he palm mutes and the way he picks, you feel the power. And the way he had his amps set up, his guitars, his pickup, all that created this certain crunch, this certain tone that I fell in love with instantly. And to me, that was more powerful. Because that palm right there… You can go back to [hums opening riff of 'Disposable Heroes']. That's all down picking… Then [hums another riff from 'Disposable Heroes'] — he had the alternate picking… And those were rhythms were, like, 'Holy shit!' It was, like, 'I've gotta learn that.' Right away, I had to learn that. But I've known him more for was his down picking, and that was really what I took from that — from his picking."

On April 16, FEAR FACTORY released its first new song in over five years, "Disruptor". The track will appear on the band's upcoming album, "Aggression Continuum", due on June 18 via Nuclear Blast Records.