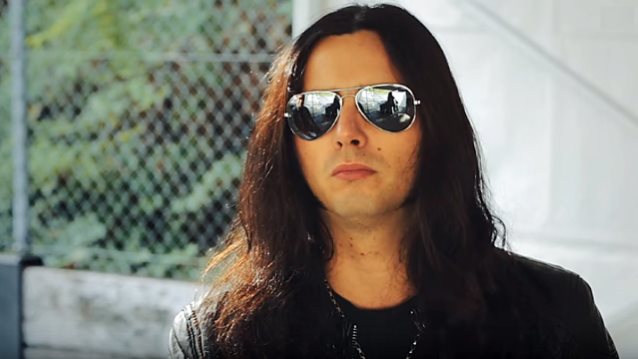 From Hero To Zero recently conducted an interview with Greek guitar virtuoso Gus G., well known in rock and metal circles for his work as Ozzy Osbourne's guitarist and as leader of his own band FIREWIND. You can now watch the chat below. A couple of excerpts follow (transcribed by BLABBERMOUTH.NET).

On how we experienced the changes in the music industry as a young artist starting out:

Gus: "Well, by the time I started making records, things were already changing; it was a big era of MP3.com and all that stuff. So, honestly, I never made records with million-dollar budgets or experienced huge sales and the whole excess of the '80s and '90s in the music industry. I was always like a D.I.Y. musician; I build everything myself from scratch, without any big corporate funding behind me or anything. I'm pretty proud of that, actually; I have to say that, considering the things that have happened in my career. I'm very happy about that and proud, because it's been very hard. It's been a long, hard road, and it certainly wasn't an overnight sensation or something, or success. So, yeah, I take pride in that, man. I don't know how things were for… I bet it's harder for musicians that were… before my era, my generation, that were used to all that, and all of a sudden they had to see this huge decline and this big change. So, for me, it didn't really change anything. I've been lucky enough to be able to survive on what I've been doing and make a good living out of it and have enough amazing fans all around the world that keep supporting [me]. I'm grateful for that."

Gus: "Well, it doesn't exist anymore. I don't know if there's any record labels or managements that do artist developments these days. Maybe once in a while you'll see it with one band that they'll put a lot of money behind it and then it'll miserably fail most times. Because, you know, that's just the nature of the music business. It doesn't matter how many big tours you get, or how much marketing you have. It matters, of course, but at the end of the day, you cannot force people to buy music or buy a ticket or something. It's something that has to happen and grow organically. Especially these days when everybody is… music is so accessible and has [been] devalued a lot. People have taken music for granted. 'Why should I buy this when I can just listen to it on my phone for free instantly?' So you really have to try twice as hard — at least twice as hard — or five times as hard. So artist development has become a very, very difficult thing, especially for young artists. It's almost nonexistent. I don't know any record labels… Most record labels are out of business, or they've become legacy labels; you know, they just stick to the back catalogue and release albums from bands from the old times, like already established acts."

On how he established his name over the years:

Gus: "Well, I've played with many bands. I started out playing in bands in Sweden, like DREAM EVIL and NIGHTRAGE and then I did a brief stint with ARCH ENEMY in 2005. You know, I always had my own band, FIREWIND, and in 2005, I decided to focus on that. But it's been like a steady thing — year after year, winning one fan at a time, tour after tour. I was probably one of the last guys that did have that thing, that so-called artist development. I had a label that helped me with tour support and stuff like that. I've had a good relationship with the guys at Century Media for years; I've been there since I was twenty-one, with that label. But things have changed, even for that label and for everybody. So I was kind of lucky that I caught the tail end of all that, and we were able to sell enough records to get to where we are today. But record sales today don't mean anything, really. It's become a thing where streams are the new record sales or something. But the sad part is that the artist doesn't get paid for the streams; they don't see any money out of that. I mean, it's the Wild Wild West out there, really. There's no rules, really, to how you're gonna construct your business. I mean, look at U2; they gave away their album. You had the U2 album on your iTunes whether you liked it or not. So anybody can do whatever the hell they want today. A lot of middle men have been cut out from the chain. But you have to adapt to that."

On the future of the music industry:

Gus: "It's hard to say, really. I think the music industry has been in an ongoing transitional period for quite a while now, so I really don't know where this is gonna go. I think good music will always exist. You will always hear good music. There will always be artists with passion out there that strive for this, and there will always be music lovers and supporters, without a doubt. Maybe it's getting a bit more of a closer circle of those people, but I think as long as that is around, you will still have albums, you will still have cool tours like this, you will still have the rock and roll shows; you know, the experience. I don't know where it's gonna go in terms of sales and all that stuff. I mean, it's hard to say; that stuff is almost nonexistent these days. What I do is I'm just kind of, like, sitting in my own corner observing what's happening and I'm just adapting, really. I don't bitch about it. I just adapt and embrace it. And you go out there and play."

Gus G.'s second solo album, "Brand New Revolution", was released in Europe on July 24 via Century Media. The CD was made available through Century Media in Australia and South America, Dismanic/eOne in North America and King Records in Japan. The cover artwork was once again created by Gustavo Sazes, who previously worked with Gus on the guitarist's debut album, "I Am The Fire", and also took care of artwork duties by such bands as ARCH ENEMY, KAMELOT and FIREWIND.