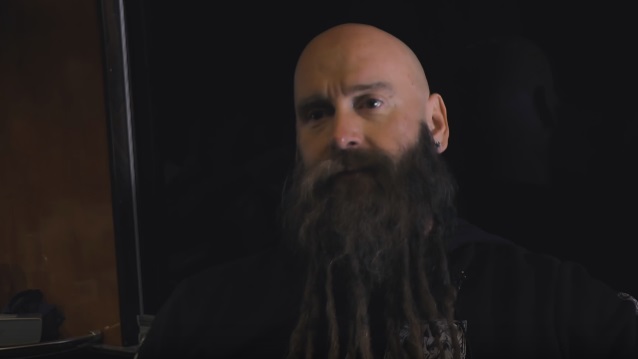 The 43-year-old musician, who joined FIVE FINGER DEATH PUNCH seven years ago, revealed in an Instagram post that he hasn't had a drink or done drugs in almost two months.

"Sober for 57 days," he wrote. "I do this for solely for myself. A great by-product is to also show to any of you struggling that you too can do it.

"Lack of sleep has REALLY been an issue, causing me some anxiety for about the last 30 days. It's almost like my body is subconsciously prepping my body for the upcoming road schedule!

"Slept from 5 a.m. to 1 p.m. today. At least I slept!‬ Thankful for a job that allows me the time to get this sleep under control and closer to a regular schedule."

In a series of tweets, Kael credited his wife with playing "a major role" in getting him clean. He wrote: "Had she not busted me trying to restock after burning through $1300 in blow in two days in late January, I truly believe that I would not be here today. I was PISSED initially; but thankful now knowing she was the one person who truly cared… She has silently and bravely dealt with far more than what would have crushed any other woman. Her loyalty, patience, TRUE love and resolve are unmatched by any other woman I've ever known. She is strong and has never broken. I am thankful far more than any tweet can convey."

Kael went on to say that "throwing my hands to the universe and admitting I was at a fucking low and no longer able to do it myself was one of the most humbling and powerful things I've ever done in my life. I was the guy who looked like he had it together. Don't let social networks fool you — I didn't.

"The only credit i give myself is realizing it wasn't working anymore and I needed to do something. Credit goes to the inner voice speaking as my heard pounded hoping it was the last time, 'You ain't done yet, motherfucker.'"

In a December 2015 interview with the "Let There Be Talk" podcast, Kael said that he first became sober after the previous month's events in France, when more than 129 people were killed in seven coordinated terrorist attacks. "When the Paris thing happened, I cut everything off. I've been sober since then," he stated at the time. He added that while he didn't consider himself an alcoholic, "I do make some fucking stupid decisions once the alcohol hits me."

Kael went on to say that his wife "never liked" the fact that he was drinking alcohol. "She's much smarter than me, much more disciplined than me, and was trying to get me to do it for a long time. And then finally, when Paris happened, I basically had a breakdown that night. I mean, it hit me hard. I was drinking, I'd done a couple of Adderalls [a drug that treats ADHD by increasing focus and attention span] and pffft… spiraled that night. And anybody that knows me from social media would have no idea that I did any of that stuff. They'd know me as kind of a drinker, but I put up a good front."

Kael denied that he was ever abusing prescription pills, explaining that he "just happened to do it that night."

Chris also pointed out that staying sober in the music business was a tough task. "When you're out in a band, alcohol is everywhere; everybody's hanging out, partying. And it's, like, 'Ugh!'" he said.

Kael is not the first member of FIVE FINGER DEATH PUNCH to publicly discuss his struggle with sobriety. Drummer Jeremy Spencer got clean and sober more than six years ago after a particularly bad episode of drug and alcohol abuse, saying that he didn't want to let his parents down after achieving the kind of success he dreamed of as a kid. Ivan Moody's own substance abuse has caused him to miss a couple of the band's tours, with the singer later apologizing to fans and revealing that he had been in a treatment facility "addressing the addiction issues that have interfered with everything in my life."

FIVE FINGER DEATH PUNCH will release its seventh full-length studio album, "And Justice For None", on May 18.

‪Sober for 57 days. I do this for solely for myself. A great by product is to also show to any of you struggling that you too can do it. Lack of sleep has REALLY been an issue causing me some anxiety for about the last 30 days. It’s almost like my body is subconsciously prepping my body for the upcoming road schedule! Slept from 5 am to 1pm today. At least I slept!‬ Thankful for a job that allows me the time to get this sleep under control and closer to a regular schedule. #HappyEaster #ShitYesSon #Delirious #SoberAsFuck